Rotary Club District 6880 has honored Demopolis Rotarian Henry Harrison with a district-wide award that will bare his name. 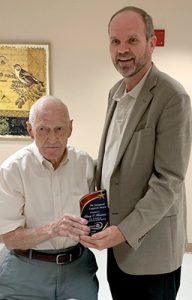 Henry Harrison, left, is presented a plaque from Demopolis Rotary President Hunter Compton honoring him for his service in Rotary and the District’s establishment of the “Henry Harrison Award.”

Harrison, who turned 100 in January, has been a Rotarian for more than 70 years. Moving forward, the “Henry Harrison Award for Outstanding Service Over the Years” will recognize the contributions and long-time service of senior members of Rotarians within the district.

A native of Arkansas, Harrison graduated from the University of Arkansas and served in the U.S. Army during World War II. After the war, he was employed with the Soil Conservation Service in Marengo County. In 1948, he became a member of the Linden Rotary Club. Harrison would be called back into the army to serve in Korea. Returning from his service, Harrison transferred to the Demopolis Rotary Club. He was the club’s president in 1962-63. A Paul Harris Fellow, Harrison had perfect attendance at Rotary meetings until very recently.

The Henry Harrison Award will be presented to a member who is at least 75 years of age, a Rotarian for at least 25 years and has earned Paul Harris Fellow status. The honoree will also have served as a club president or officer.

“While Rotary rightly focuses on youth to join the organization,  Rotary also wants those young adults to join for life.  Attracted to the principles of Rotary,  Harrison was just such a young man, and he dedicated his life to service to his country, his family, his church, his community and Rotary,” stated an announcement of the new award.

Rotary District 6880 includes at least 27 clubs from across the southern portion of Alabama.