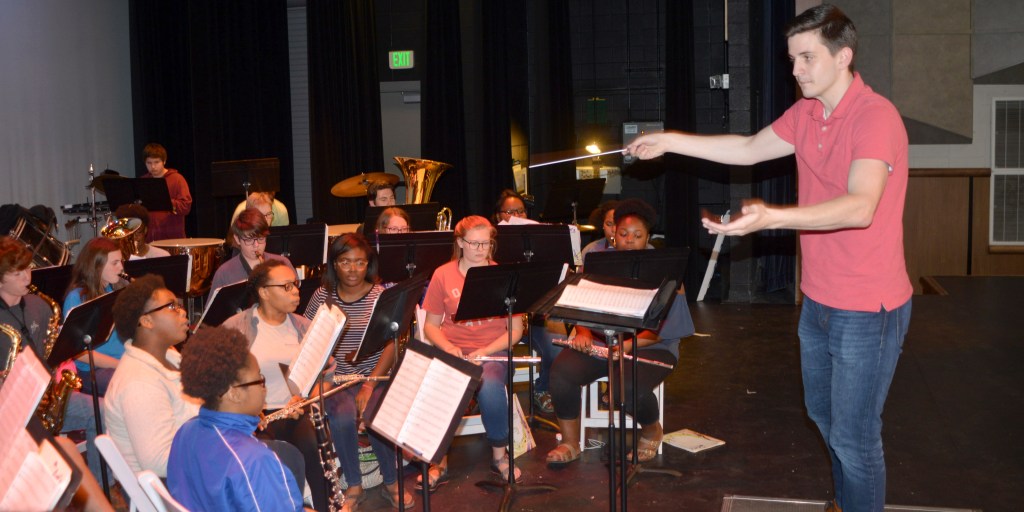 Tyler S. Grant conducted a clinic with the DHS Wind Ensemble with two of his pieces, “Paceline” and “Winds of Celebration.”

River City Blue’s Wind Ensemble at Demopolis High School and the Demopolis Middle School Symphonic Band were both under the helm of a guest conductor and composer for a portion of the two-night Spring Concert. Tyler S. Grant, a recent University of Alabama graduate who has been a composer for 10 years and a conductor for five, led the bands through his own pieces, “Paceline,” “Winds of Celebration” and “Along the Beaches of Normandy.”

During Grant’s clinic with the DHS Wind Ensemble, who performed “Winds of Celebration” and “Paceline,” he gave insight into the pieces and feedback for the musicians while answering any questions they had.

“I was very impressed with the students’ performance given the number of pieces they have been working on at this time in the semester,” Grant said, adding “I’m very pleased with how they sounded.”

“Winds of Celebration” was written to honor a school’s anniversary, hence the celebratory notes, and was performed by the entire ensemble. “Paceline” is described as exciting and adrenaline-filled by Grant. The piece is meant for Advanced Trombone and Young Band. The trombone soloist was Ariel Williams.

“The soloist did a fantastic job, and I was blown away by her level of playing,” Grant said.

Grant conducted the DMS Symphonic Band through his piece “Along the Beaches of Normandy.” A Mass Band performance of “At Twilight” with the DMS Symphonic and 6th Grade Concert bands concluded the Spring Concert.

Director of Bands Demetrius Scott said what started last year is shaping up to be an annual tradition, and the introduction of a new conductor, even for a short while, leads to lightbulb moments for many of the students.

“A lot of high schools don’t do it, but it is really a treat for them to have someone come in who actually wrote the piece,” he said.

The Spring Concert took place May 6 and 7 at the DHS Auditorium.

(This article originally appeared in the Wednesday, May 15 issue of the Demopolis Times.)