In recent months, two new leaders have emerged to serve and protect Demopolis. Police Chief Rex Flowers was named by the city council in February after a long career in the Demopolis Police Department and serving as Interim Police Chief since December and Fire Chief Keith Murray was named in April after serving as Deputy Fire Chief for several months.

Police Chief Rex Flowers has spent his entire career protecting Demopolis citizens. He graduated from Demopolis High School in May of 1993 and just a few months later he was a member of the DPD. 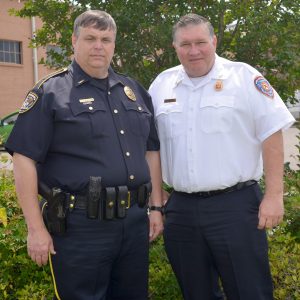 At first, he performed dispatch work, too young to meet the state’s minimum officer age of 19 and Demopolis’ of 21. When he was 20, the Police Chief at the time, Chief Charles Avery, decided to go with the state minimum and promoted Flowers to patrol officer, which marks Flowers’ most memorable moment of his career.

“It meant a lot to me. It was something I wanted to do all my life,” Flowers said.

His love for public service was born when he and some friends joined the Junior Police Academy at age 14 and has grown ever since.

As a member of the DPD, Flowers has worked in several different capacities and on countless cases. He has also worked alongside state and federal authorities many times throughout his career.

While continuing on the path of public service that he has followed since he was a teenager, Flowers is also increasing the department’s community outreach, most notably with the introduction of the Children’s Police Academy. For his officers, Flowers is also looking to increase the starting pay to help with retention rates and to set the police vehicles on a rotation schedule to prevent intensive repairs.

Reflecting back on his 27-year career, Flowers has a number of specialized training achievements, such as participating in the Leading by Legacy program for the International Association of Chiefs of Police, attending the Southeastern Law Enforcement Executive Development Seminar and continuing his education in the Certified Law Enforcement Executive Program. Flowers also said that each of his promotions — from patrol officer all the way to police chief — were notable moments in his career.

When he was officially sworn in as police chief in February, Flowers said he was proud to achieve his long-term goal.

“It’s overwhelming to make it to where you’ve always dreamed.”

Fire Chief Keith Murray’s career in fire safety was slowly built from his various roles in Largo Fire Rescue in Florida and in serving the country in the military, in which he reached the rank of Sergeant Major before retiring in 2016.

He was a firefighter paramedic with the Largo Fire Rescue for 23 years before retiring there in 2016.

“It was one of those where every little thing that I did – doing driver training, SWAT training, rescue – they all had different types of needs, credentials and training,” he said.

While in the military and fire department, Murray built a large safety and leadership background, which he brought to Demopolis when he was named Deputy Fire Chief in November 2018 by then Director of Public Safety Tommie Reese.

Because of his own vast number of skills, Murray plans to use the talents of everyone in his department, whether they are based on their professional or personal life.

“I want to use you for everything that you bring to the table,” he said.

Once he moved to Demopolis, Murray set about making the department even more safety oriented by repairing and replacing protective gear, revising standard operating procedures to be more compliant with state and federal guidelines, instituting a paperless report system in fire trucks and the rescue truck and conducting a thorough analysis of the department.

Moving forward, Murray plans to build on what he has already started by continuing to apply for grants, hosting a Firefighter One Program with DHS which would allow the students to be marketable for a job upon graduation and certification and increasing EMT training within the department.

Some of his proudest moments in his personal and professional careers include being named an Eagle Scout and being honored with multiple United States Army recognitions including the Bronze Star Medal, Combat Action Badge, Airborne Badge and Air Assault Badge.

Murray said his time with the Largo Fire Rescue and in the military, especially as Sergeant Major, gave him the skills necessary to lead the DFD.

“It’s the pinnacle of everything I’m about.”

(This article originally appeared in the Wednesday, May 29 issue of the Demopolis Times.)