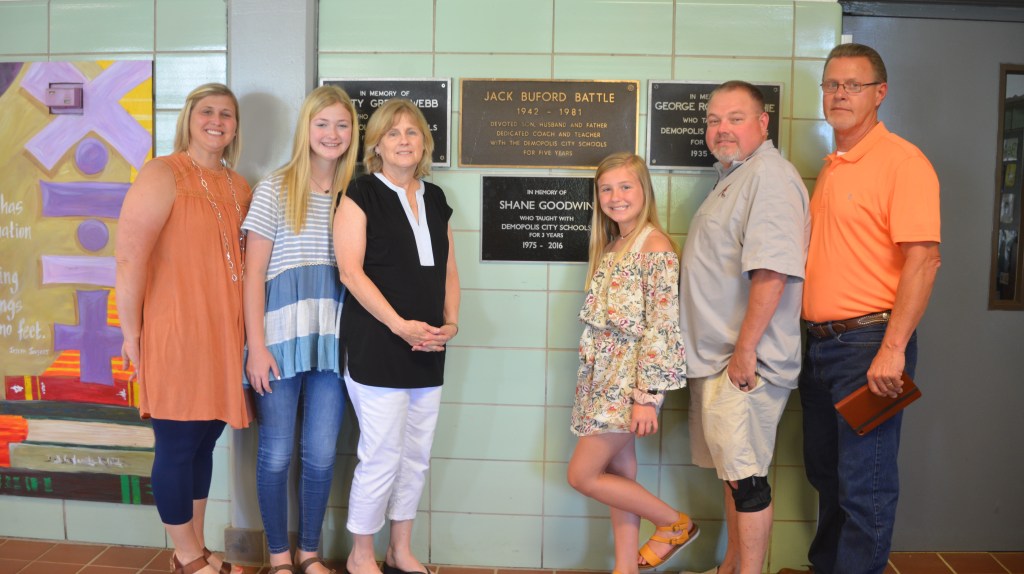 The Demopolis City Schools System, along with several friends and family, honored the late Shane Goodwin with a memorial plaque at an unveiling in the Demopolis Middle School lobby on May 24.

Demopolis High School Principal Blaine Hathcock, who was principal of DMS during Goodwin’s time at the school, said Goodwin was a good mentor to the students he taught as supervisor for the system’s in-school suspension program.

“He was a good employee, but more importantly he had a positive impact on these kids,” Hathcock said.

Goodwin worked at DMS for three years until his death in 2016 and touched 600 students during his time there.

The memorial plaque was unveiled by Goodwin’s parents, his father Joey Goodwin and mother Darlene Carlisle.

“It’s just a blessing, and we just want you all to know that we thank you so much,” J. Goodwin said.

Goodwin, who was also pastor of First Christian Church in Demopolis, was also honored by the church with the creation of “Shane’s Closet,” a closet stocked with school supplies for students in need in the office of DMS Counselor Laura Holley.

The memorial plaque is part of a tradition of DCSS for honoring faculty and staff that pass away while part of the school system.