Rep. Terri Sewell (D) addressed constituent concerns raised by Demopolis Mayor John Laney about the fate of rural hospitals and highlighted one major factor in their decline during a town hall in Linden on May 29.

With the acknowledgement that “rural hospitals are dying,” Sewell shared details of a bipartisan meeting held between her, Sens. Richard Shelby and Doug Jones and Centers for Medicare & Medicaid Services Administrator Seema Verma, honing in on Alabama’s wage index, which determines reimbursement rates for hospitals and is one of the lowest in the country. 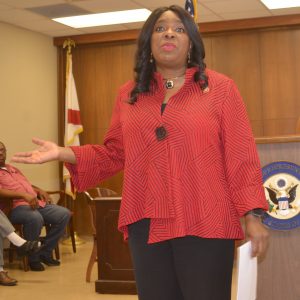 “We’re going to see, but we are making some advancements and strides towards it,” she said.

Healthcare was also one of the first things Sewell addressed at length during her speech, first with tackling her role on the Subcommittee on Health as part of the House Committee of Ways and Means, of which she is vice-chair.

Sewell said she is working to bolster the Affordable Care Act (ACA). “It is not working the way it should work,” she said, citing issues with navigation, registration and costly premiums and subsidies.”

To combat some of these concerns, Sewell co-sponsored a bill that has passed through the House of Representatives and is now in the Senate. Even if the bill is not passed, plans are on the house floor to fight for funds in order to subsidize the ACA and lower the insurance costs.

While Sewell said that both parties have contributed to a “political footwall” with the ACA over the past few years, she also affirmed that her first priority as a member of the Ways and Means and health is to stabilize the ACA. Her goals within stabilization include lowing premiums and making subsides more accessible to those in need.

Sewell’s healthcare initiatives also include lowering the cost of prescriptions drugs, which she said can be achieved by negotiating drug prices as is done with Medicare and Tricare, a route that other industrialized countries have taken as well.

Sewell’s final notes on healthcare pertained to rural healthcare, mentioning briefly the importance of rural hospitals, especially when faced with hospitals closing wards, such as the maternity ward, to cut costs or shutting down completely. Sewell also has introduced a bill to increase the number of health studies on African Americans to combat racial health disparities.

Sewell is also working with Alabama Sen. Doug Jones to introduce a bill that will make it free for Alabama to expand Medicaid as an incentive.

“That bill will not move until states like Alabama and their state legislatures start to move towards expanding Medicaid,” she said.

After relating her concerns of high healthcare costs to those of low wages, Sewell shared her plans for Phase-In $15 Act, an offshoot of the “Fight for $15” movement that aims to raise minimum wage to $15 an hour. The act would slowly raise the minimum wage while reflecting costs of living.

“It has to be a phase-in process so that small businesses are not crunched and people do not lose their jobs.”

Next, Sewell discussed the United States-Mexico-Canada Agreement (USMCA), which serves as a renegotiation of the North American Free Trade Agreemen (NAFTA). Sewell supported USMCA’s addressing of Mexican labor laws that entice companies to move factories to the country as well as a chapter on Digital Trade.

However, as a condemnation of the 25 percent tariff President Donald Trump is considering placing on automobiles and auto parts based on threat to national security, Sewell co-sponsored a bipartisan letter signed by 171 congressmembers against the tariff.

Despite her criticism, Sewell said she looks forward to reviewing the agreement. “I don’t want to displace more American workers, so we’ve got to make sure that this really works for everyone, and I will be reviewing it with a fine-tooth comb.”

Sewell said her talks that day of infrastructure came with disappointment at Trump’s decision to halt talks on infrastructure until investigations on him stop, though she did express a belief that there was much bipartisan support for infrastructure improvements.

Another project of Sewell’s that she shared at the town hall was her combined efforts with Ivanka Trump to support paid family medical leave. While I. Trump initially focused on maternal care, Sewell expanded the parameters to include other types of leave such as paternal care, adoption leave, foster leave and caregiving leave.

“Family emergencies are more than just the birth of a child,” she said.

During the close of her speech, Sewell warned that one of the biggest takeaways from the Mueller report is that Russia “did interfere in our election, and they’re going to continue to do it if we don’t do something about it.” She said the integrity of the election system is at stake, and she wants more funding for election security.

She ended with a reminder to the crowd to vote in all upcoming elections and shared her intent to pass the Voting Rights Advancement Act through the House of Representatives by the end of the year. Her bill will restore the Voting Rights Act after it was diminished following the 2013 Supreme Court decision in Shelby vs. Holder that stated Congress needed a modern-day formula to determine which jurisdictions have to be precleared before making any voting changes. Without the formula, jurisdictions are not subject to preclearance. Critics say the decision has made voter discrimination easier.

“The folks in our district sacrificed, marched, bled, died for the right to vote, and I want to make sure that we have the full protections of the Voting Rights Act.”