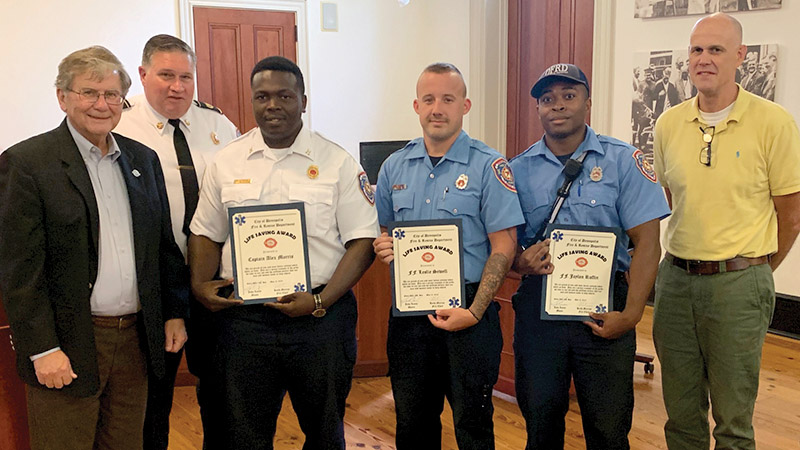 Three members of the Demopolis Fire Department were presented with the Life Saving Award during a city council meeting for their efforts in responding to a recent medical emergency.

“The council invested in these guys and my family thanks you. They were at my house within 2-3 minutes and that’s the only reason I’m here,” said Harris Hurst, a member of the Demopolis City Schools Board of Education and the recipient of the first responders’ care that day. 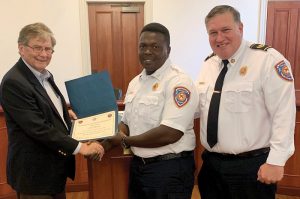 Morris was also recognized upon 10 years of service with the department.

Also during the meeting, the council approved a longterm lease on an ambulance for the DFD. According to Mayor John Laney, the ambulance was initially leased for 12 months. “We wanted to see how it worked for us, but now have decided to make it a permanent part of the community,” the mayor said after the meeting.

Other items discussed by the council included the following.

• A $1 million loan was approved. The loan is being taken to assist Bryan W. Whitfield Memorial Hospital. The council approved a bid from Trustmark Bank, which presented the lowest interest rate of 2.8 percent.

• City Attorney Hunter Compton reported to the council regarding efforts to annex certain property at the Airport Industrial Park. The attorney advised the council to approve the annexation, which would allow the city to proceed once the state legislature returns to session. The item was continued to the next meeting.

• The council also approved a $12 permit fee for golf carts driven on city streets. The permits, which include a decal, may be purchased at city hall.

• Replacing a weather siren was discussed. Murray estimated the cost would be about $5,000.

• Murray also reported that the fire department is working with Demopolis High School officials in developing a program allowing students to take fire college courses, possibly being certified by the time a participating student graduates. The plan is still in the early stages, he said.

• A presentation for leasing vehicles for the police and fire departments was discussed. No action was taken.

• The council tabled a discussion regarding the city landing water tower. The Water Works Board said it would provide the $63,000 intended for demolition toward any renovation efforts, if that is how city officials decide to proceed.

• A property at 505 S. Commissioner Street was approved for demolition. The large home was damaged by a fire and has not be repaired by the property  owner. “I feel we owe that area some action. I keep getting asked when the city is going to do something,” said Building Inspector Julius Rembert.

• The council also approved moving the meeting scheduled for July 4 to  Monday, July 8.