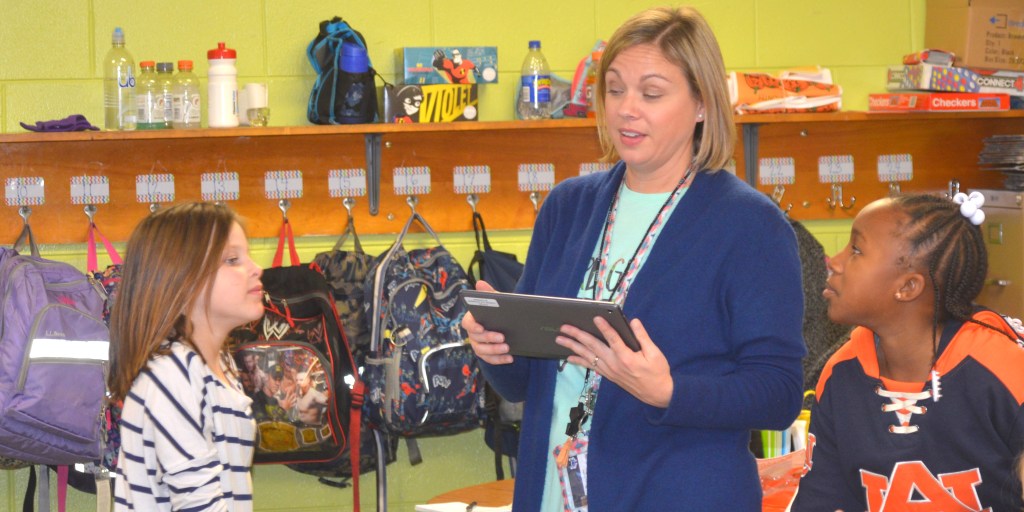 Adrienne Etheridge answers questions from Mary Karsyn Wheeler and Zhoe Jones about the solar system. The questions were inspired by the third grader’s virtual reality lesson about space.

(Editor’s Note: This is the second in a four-part series highlighting the impact of Demopolis City Schools Foundation’s classroom grants.)

Gasps of awe and outstretched arms filled the air in Adrienne Etheridge’s third-grade class at U.S. Jones Elementary School. Her students grasped their fingers to catch what was in their sight: Jupiter.

Etheridge is able to take her student’s all over the world — and out of it — with the use of virtual reality goggles. 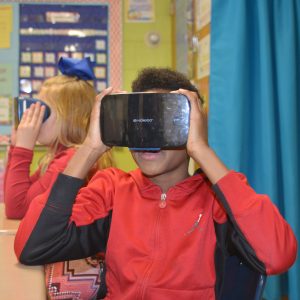 Jadie Hasty and Marzaevious Winters use virtual reality goggles to learn about Jupiter and the Juno spacecraft.

She was awarded the funds to stock her classroom with 20 Google Expeditions Virtual Reality Kits in October but was able to strike a deal with Best Buy to get an extra kit so every student had one. While her classroom has grown and students have to share after all, it has given rise to any problems. The students are as excited to show the view to others as they are to see it themselves.

“We can go visit places, and we can learn more about some places,” student Zhoe Jones said.

Students can travel to the ocean floor, historic landmarks and natural wonders with the goggles that contain a Samsung phone equipped with the accompanying app that lets them travel the world and beyond. Etheridge controls the lessons via iPad program.

She lets them look around for a minute, taking in the new landscape, before directing them to the next stop, like the Juno spacecraft that once orbited Jupiter. Arrows appear on the students’ screens to send them to the right spot, and the app tells her which students are actually looking at the mark. From there, Etheridge narrates and asks questions.

The VR lessons serve as an introduction to foster excitement before a more traditional classroom lesson. Thanks to their new ability to see and explore their lesson while learning about it, Etheridge said that the students are more engaged and interested than if they were just learning from a book.

“It definitely helps pique their interest. And if you’re interested in something, you’ll want to learn more about it,” she said.

Etheridge wrote the grant because she felt it is always a good idea to incorporate technology into lessons, plus the virtual reality makes the lessons more real and meaningful to students. She also knows that not every student is able to take a trip, school-sanctioned or otherwise, to learn and explore new things, but virtual tours can fill that gap.

She initially wasn’t sure she would be awarded the grant, given how much money she was asking for. The VR kits took $6,684 to bring into the classroom.

However, this is not the first set of VR goggles that the Demopolis City Schools Foundation has seen. The board members understood the powerful impact virtual reality can have on classroom lessons and the benefit of having technology that can be shared with every other classroom in the school.

“These glasses allow our students to go on virtual field trips and see things many of us will never see in person,” DCSF Executive Director Amanda Barnes said. “This grant is a good example of how more expensive resources can be shared – one set of glasses can be used, after some training, for several classrooms, allowing for maximum return on our investment.”

U.S. Jones’ set is the third that the foundation has funded, with the other two being at Demopolis High School and Demopolis Middle School.

Etheridge was overwhelmed when the kits first arrived at the classroom but found setting up and operating the devices to be surprisingly simple.

The students will visit national monuments, national parks, the Appalachian Mountains and Washington D.C. “There’s so many places that I want to take them,” she said.

Etheridge’s students have only reacted positively to the virtual reality lessons. Student Marzevious Winters gave some insight as to why. “It’s like you’re just there. It’s like it’s real.”

(This article originally appeared in the Wednesday, June 12 issue of the Demopolis Times.)