An escapee from a parolee facility in Thomasville was apprehended by local law enforcement in Demopolis on Friday, June 14.

Mark Anthony Creel, 37, walked away from LifeTech, a facility that assists inmates transitioning to society, Friday morning. After leaving LifeTech, he allegedly stole a vehicle and made his way north. 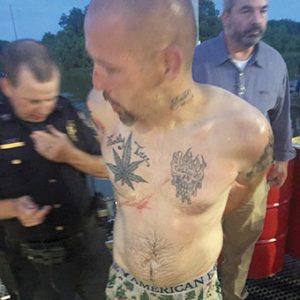 Mark Anthony Creel, an escapee from LifeTech in Thomaston, is taken into custody Friday after hiding under a fuel dock at the Demopolis Yacht Basin.

At approximately 10 a.m., an investigator with the Demopolis Police Department found the stolen vehicle on the side of Hwy. 80, near WestRock, where Creel apparently ran out of gas.

According to Demopolis Police Chief Rex Flowers, Creel found a ride back into the city after the stolen vehicle ran out of gas. Once in the city, he made at least two stops — Demopolis TV/Cable and the Marathon service station on Hwy. 43 — asking for directions to Birmingham. It is believed that while at the Marathon station, Creel called for a ride. “We thought at that time that he may left town,” Flowers said.

Shortly later, police received a call of an unknown male walking around the yacht basin. “Two plain-clothes investigators went there and found him on the fuel dock,” the chief said.

As they attempted to take Creel into custody, he struggled and jumped into the river and hid under the fuel dock. For a while, police could not see Creel’s exact location under the dock. “We couldn’t see him, but we knew he was there somewhere,” Flowers said.

Alabama Conservation Officer Lt. Joe Goddard was the first to spot Creel’s hiding place. Mace was sprayed into the area where he was hiding, which forced him out and into police custody at about 8 p.m.

Flowers said Creel may have been at the yacht basin buying time until a ride came for him or perhaps waiting until dark.

Creel was serving a sentence for theft of property.

Flowers said he appreciated the assistance provided by the Alabama Conservation Police, the 17th Judicial Task Force, and the Eutaw Police Department.