The Mt. Horeb Baptist Church congregation celebrated their 17th year under the leadership of Rev. Mitchell Congress on June 9 at the Demopolis City Civic Center. 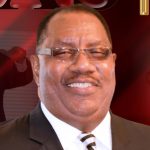 Congress said it has been blessing leading the congregation and that they have become a second family to him over the years. He has known many of the younger members of the congregation since birth.

“I was there when they were born. I baptized them, and now they are in junior high and high school,” he said.

Mt. Horeb is the only church that Congress has ever pastored, having joined them in 2002 after being ordained in 1996.

“I feel privileged and honored to have been able and to be able to touch the lives of so many in a spiritual way,” Congress said.