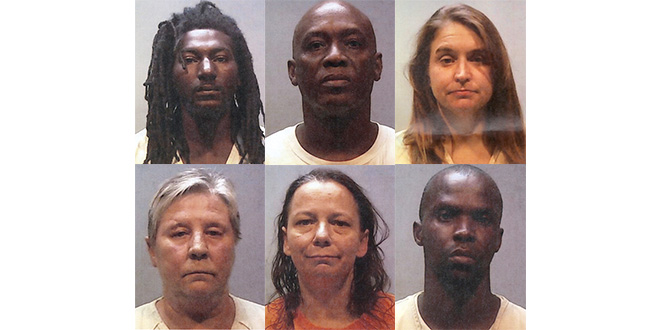 The Linden Police Department arrested five individuals on drug distribution charges on Saturday, June 22, between the hours of 3 and 6:30 a.m. A sixth suspect was arrested on June 25.

Norris Lee Rogers, 64, was charged with one account of unlawful distribution of controlled substances and Lisa Crosby Suttles, 57, Kimberly Fell Windham, 43, Eric Lamar Wolf, 39, and Abner Lequinta Banks, 28, were changed with two accounts. Each individual was arrested at their residence and transported to the Marengo County Detention Center with $25,000 indictment bonds for each account.

The sixth suspect, Jami Carol Samples, 33, turned herself in at the Marengo County Detention Center where she was charged with one count of distribution of a controlled substance. She was later released on a $25,000 bond.

Aside from Suttles, who is a Providence resident, all suspects are Linden residents. Samples residency is unknown.

The charges against each suspect are unrelated to one another.

The LPD is working to locate one additional suspect who could be charged with distribution on controlled substances.

The 18-month investigation began in January 2018 and was led by Lieutenant Cody Cross. Information from a police informant and police observation led to the arrests.