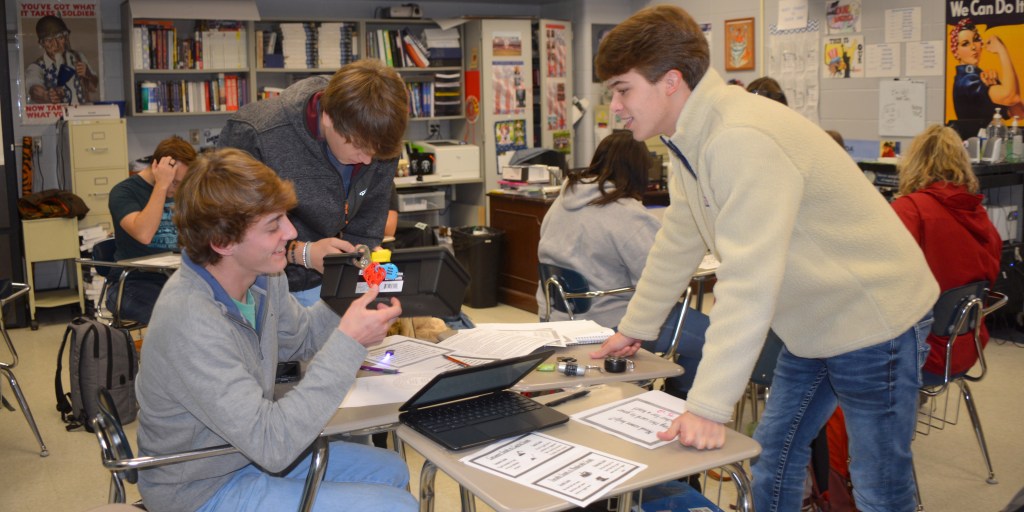 (Editor’s Note: This is the fourth and final in a four-part series highlighting the impact of Demopolis City Schools Foundation’s classroom grants.)

Students in Connie Boutwell’s Pre-AP Economics class at Demopolis High School raced against the clock and their classmates while solving puzzles related to the lessons to break into their new BreakOut Boxes.

The boxes themselves were modeled after Breakout EDU’s, but Boutwell bought supplies from Amazon and built the boxes herself to save money. The puzzles, however, did come from Breakout EDU, but eventually Boutwell plans to introduce her own puzzles into the activity as well. 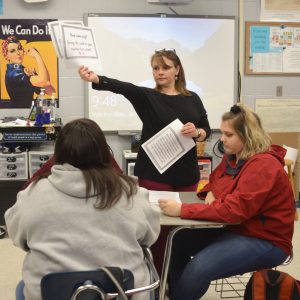 Connie Boutwell explains the rules of the BreakOut Boxes before starting the timer at 40 minutes.

Each box is secured with five locks that are opened by different means – with a word, a four-digit number, a three-digit number, a key or a directional path. A small blacklight flashlight is also attached to the box and is used during one of the puzzles. Inside the box are two prizes to choose from, snacks or a free daily grade pass.

Groups solve the puzzles in any order and with any strategy they want. During one Pre-AP Economics class, students were separated into groups of three and either solved each puzzle together or separately.

The puzzles were all different, too. Some students scanned QR codes that took them to a quiz on Google Slides and other completed more traditional puzzles like crosswords and solving codes.

Boutwell was inspired for her grant when she went to a teaching conference and participated in one herself. In her grant application, she described the purpose as having a student-centered classroom with active learning, whether the students realize it or not.

“This teaching tool actively engaged students in problem-solving skills, critical thinking, working under pressure and troubleshooting. These boxes are student-centered and promote collaboration and communication skills as well,” she wrote.

The boxes can be used for any topic and at any point in a lesson.

“I think the BreakOut Boxes keep the students’ attention and gets them excited. It is a good way to introduce a topic or to help review before a test,” Boutwell said.

The Pre-AP Economics students expressed similar thoughts in an anonymous survey taken after the class. Nineteen out of her 26 students were excited when she first announced her grant, partly because many of them have completed Escape Rooms before.

Each student also said they enjoyed the boxes, whether it be for the challenge, for the lesson or just for the fun.

“I liked being able to work as a team with others and challenge ourselves,” one student said.

Because of the variety of puzzles that Boutwell uses for the boxes, each student can take part and contribute what they can.

“There is always a way for each student at every ability level to contribute to the group effort,” she said.

The only two challenges that Boutwell faces are the amount of time set-up takes and her concerns with losing any parts or codes that make the boxes usable.

The Demopolis City Schools Foundation frequently fund grants that shared throughout classrooms, which added to the benefits of the BreakOut Boxes. The grant committee also appreciated that it was an inexpensive and creative idea.

“This was a low-cost grant that the committee thought might be something fun to try and might add some student interaction and engagement to a class that many grant committee members recalled as a dry subject.  Also, the committee felt the element of competition would encourage some students who thrive in a team-sport environment,” DCSF Executive Director Amanda Barnes said.

In the first time using the BreakOut Boxes, Boutwell’s Pre-AP Economics students all completed the boxes within the 40-minute time frame, and everyone received one of the two prizes within the boxes. The winning group broke into the boxes with 18 minutes to spare and took home both the daily grade pass and the snacks hidden inside.