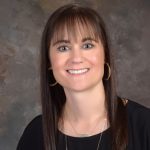 Parker began working at Robertson Banking Company in 1999 after attending The University of West Alabama. In 2006, she transitioned into loan administration where she has been involved in loan training and customer service. She was promoted in 2009 to Assistant Cashier and in 2016 became an Executive Assistant.

Parker is a 2019 graduate of The Southeastern School of Consumer Lending at Vanderbilt University. Her past civic involvement includes Leadership Marengo, the March of Dimes and the American Cancer Society.

Parker has been married to her husband, Clayton, for 10 years and she enjoys reading and spending time outdoors in her spare time.

“Kristi has a wealth of knowledge in consumer lending that will serve the bank and our customers well. She is a lifelong native of Marengo County and we look forward to her continuing our commitment of service to Marengo County,” said President and CEO Gary Holemon. Robertson Banking Company is a locally-owned and operated $300 million asset bank with offices in Demopolis, Linden, Thomaston, Tuscaloosa, and Birmingham. Established in 1870, the bank looks forward to celebrating 150 years of service next year.