Selwyn Vickers, M.D., senior vice president and dean of the University of Alabama at Birmingham School of Medicine, has been named as the 2019 Dr. James T. Black Award recipient by the 100 Black Men of America, Inc. Vickers accepted the national award, which is given to one physician annually, at The Chairman’s Awards Luncheon in Las Vegas last week. 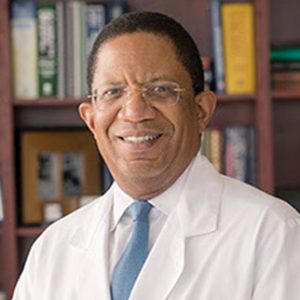 Selwyn Vickers, M.D. is the 2019 recipient of the Dr. James T. Black Award, which is presented to one physician annually.

“It is an honor and a great opportunity to mentor and serve the community,” Vickers said. “I want to thank the 100 for this recognition and thank everyone at UAB and in the School of Medicine. This acknowledgment is a reflection of the talents and abilities of our people — our physicians, researchers and students, and it further reinforces that Birmingham is a place for the nation’s best talent to live and thrive.”

Vickers learned the value of a mentor and community servant as a teenager. Born in Demopolis and raised in Tuscaloosa and Huntsville, he was inspired by his uncle, Leroy Vickers, M.D. The younger Vickers was 15 when his uncle became the first physician to graduate from Tuscaloosa’s Stillman College in the early 1970s. He had the opportunity to see how his uncle cared for the sick, and it motivated him to seek a career in medicine, where he has become a world-renowned surgeon, pancreatic cancer researcher and pioneer in health disparities research.

Vickers currently leads the research collaborative Center for Healthy African American Men through Partnerships, which is a first-of-its-kind consortium of academic centers and community organizations that works to develop, implement and evaluate interventions to improve African American men’s health through research, outreach and training.

The effort is led by UAB and the University of Minnesota with multidisciplinary teams of investigators and national experts in diverse fields. Community partners include the National Football League, 100 Black Men of America, Inc., and the National USA Foundation, who have strong relationships with African American communities. These relationships are essential in developing collaborative strategies to change the current health trajectory of African American men.

“Dr. Vickers’ work to improve the health care provided to the people of Alabama, and really the United States and the world, befits the honor of his selection by the 100 for the Dr. James T. Black Award,” said Ray L. Watts, UAB president. “The progress and success of the School of Medicine over the past five years in all areas of its mission — clinical care, education, research and beyond — has been well-documented recently, with our school among only eight elite academic medical centers to see an increase of more than $100 million in NIH research funding in that timeframe. The impact of this is measured in the number of lives saved, touched and improved by the work of our talented faculty and staff. I am deeply proud of Dr. Vickers and the entire school for their efforts and the many significant goals they have achieved. His recognition by the 100 is a fantastic honor for him, our university and the School of Medicine.”

UAB’s medical enterprise has experienced a powerful growth spurt for a decade, and especially in the past five years under Vickers’ leadership. The continued evolution has further advanced UAB’s reputation and thrust it onto the national stage for research, patient care and education.

“I have worked with many great School of Medicine deans and outstanding surgeons during my career, and without question, Dr. Selwyn Vickers is one of the best of both,” said Will Ferniany, CEO of the UAB Health System. “He is a brilliant leader and visionary; but at the same time, he is always very humble in his approach toward everyone. Alabama and UAB are proud to have him.”

Vickers was named dean of UAB’s School of Medicine in August 2013 after leading the University of Minnesota Medical School’s Department of Surgery. He previously served on UAB faculty from 1994-2006.

The award’s recipient is in good standing nationally and with his local chapter, is actively involved with the 100’s National Health and Wellness Committee, and has supported the 100 through its health and wellness initiatives locally and nationally.