Mr. Nelson was born Oct. 7, 1965 in Demopolis. He was a former millwright and a 1984 graduate of Marengo Academy. He was an avid University of Alabama fan and a member of Myrtlewood Baptist Church. 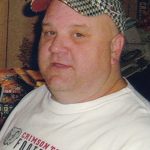 He is survived by his father, William Vaden Nelson; sister and brother-in-law, Becky and Dylan Joiner; nephew, Joshua Jones; niece, Madison Jones; and a special aunt and uncle, Ruth and Armon Mosley

He was preceded in death by his mother, Sarah Nelson

Honorary Pallbearers were members of Marengo Academy’s Class of 1984.

Condolences may be offered at www.obryantchapelfh.com. Arrangements by O’Bryant Chapel Funeral Home.