Canebrake Players take ‘To Kill a Mockingbird’ to the stage 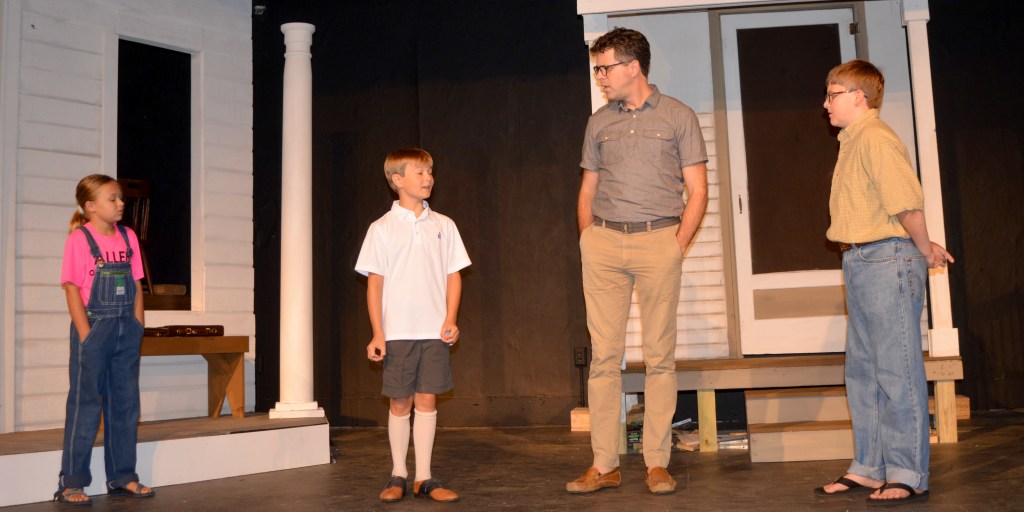 During a scene from “To Kill a Mockingbird,” Atticus Finch, portrayed by Kirk Brooker, tells his children, Scout and Jem, and their friend Dill to leave Boo Radley alone. Pictured are, from left, Eva Mason as Scout Finch, Lawson Boone as Dill, Brooker and Ben Lindsey as Jem Finch.

The Canebrake Players will bring “To Kill a Mockingbird” to the stage at the Old School on Main Street, July 19-22.

Susanna Naisbett is tackling the classic tale and its heavy themes as the director of the play, with the help of Leslie Gibbs, who is portraying Miss Maudie Atkinson and taught the book in her high school classes for 15 years.

Gibbs used her years of teaching and analyzing the novel to bring extra character depth to the play’s version and by giving a short reading and lesson at the beginning to each rehearsal, followed by a discussion of the entire cast about the passage and what it means to the characters and the overall story.

From the beginning, Naisbett was worried about the sensitive subject matter and offensive language used throughout the play but said she made each decision carefully to keep the play and its message as authentic as possible. Gibbs added that she has seen the play three different times and was always captured more by the story than the language and sensitive material.

“I went away from those plays thinking ‘what a powerful story of love,’” she said.

With the inclusion of the offensive language, Naisbett and the rest of the cast had an open discussion about the book and the language, which Gibbs said helped ease a lot of the misgivings of cast and crew, including Naisbett.

“What you’re seeing is an authentic effort to portray the story in a way that emphasizes the value of every life on this planet,” Gibbs said.

Naisbett and Gibbs said they believed that “To Kill a Mockingbird” teaches important lessons about love, acceptance of everyone regardless of race or social class and not adopting negative social attitudes.

The play also requires 12 male characters, and Naisbett initially worried about filling each role. However, she was able to cast all 20 speaking characters, six extras and eight crewmembers in the play.

The set pieces were designed by Kirk Brooker, who plays Atticus Finch, using the input of Naisbett. This is also the fifth Canebrake play that she has directed.

The performances of “To Kill a Mockingbird” will be at 7 p.m. every night except on Sunday, July 21, which will be a 2 p.m. matinee. Tickets are available at the door. Adult tickets are $12 and student tickets are $5.