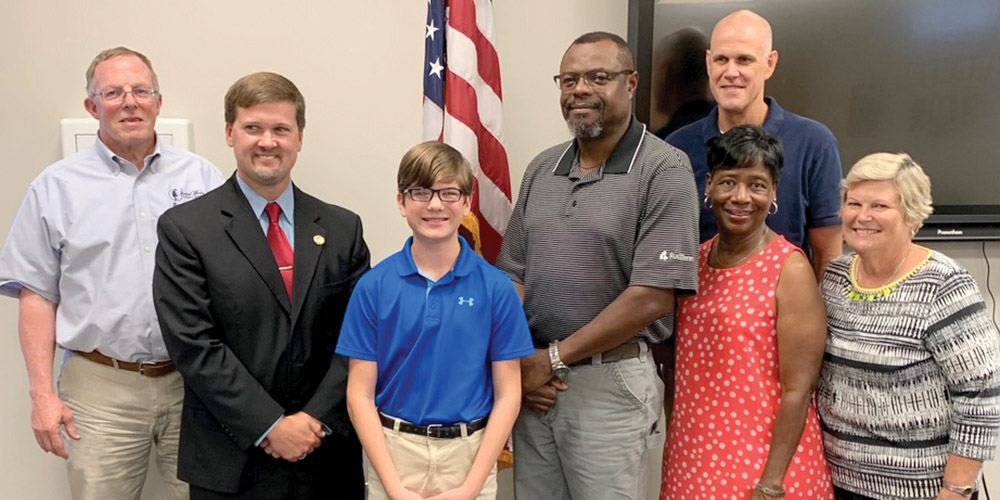 Demopolis eighth grader Charles David Johnson, center, attended the National Young Leaders Conference in Washington D.C. this summer. He is pictured with members of the DBOE.

The Demopolis Board of Education has hired an architect for paving projects and hired new teachers for the upcoming school year. Students’ first day back to school is August 8.

The system will have paving projects at each of its campuses and have approved McKee and Associates to serve as architects of that project. Superintendent Kyle Kallhoff said the total cost will be over $200,000 and that all paving could be completed by the Christmas break.

Summer construction work continues at Demopolis Middle School where projects are underway to meet standards set by the Americans with Disabilities Act (ADT). During that work, a crack was found in the school’s foundation and there is an issue with the gym floor at the high school.

Kallhoff said the system could make an amendment to its submitted plan for Educational Trust Fund money. The original plan involved converting the high school’s former Home Economics classroom into a STEAM lab.

“We budgeted $50,000 for re-purposing the home economics room, but we could use that money for emergencies such as these,” Kallhoff said.

This summer has also seen updates to school technology. There will be 70 new teacher computers at DMS and DHS and the system is moving from a physical server to one that is cloud-based.

Personnel matters were also discussed. With federal dollars for the system down slightly, Kallhoff said plans to hire a social worker is no longer viable. “Right now, there would be no way to sustain that,” he said.

The board also approved contracts with Elaine Carr and Jennifer Jones to split time as special education teachers. The two retirees have agreed to split those duties until the system finds a permanent teacher for the high school.

The board also re-newed a contract with Leon Clark as truancy officer for the system.

Transfers include Ricky Richardson from paraprofessional at WES to same title at DHS and Kole Thrasher is moving from career prep teacher at DMS to physical education teacher at USJ.

The Superintendent said all teachers have had a busy summer in professional development with more to come, including local orientation for new teachers prior to the new school year.

Other items discussed by the school board include the following.

• The board received a report from eighth grader Charles David Johnson who  represented DMS at the Junior National Young Leaders Conference in Washington, D.C. He was nominated for the honor by his math teacher, Amanda Smith.

• Approving the first reading of a policy on supervision of low-risk juvenile sex offenders. The policy is a state-mandated requirement of all schools. A public hearing will be held August 1 at 3:30 p.m.

• Approving an application for the 2020 At-Risk/High Hopes Grant.

The BOE will meet for a special-called meeting on August 1 and the next regular meeting is scheduled for Monday, August 19, 5:15 p.m., at the central office.

(This article originally appeared in the Wednesday, July 24 issue of the Demopolis Times.)