Linden resident and bladesmith Doug Butts competed on History Channel’s “Forged in Fire” where he went up against three other bladesmiths to recreate historical weapons and hopefully take home $10,000 and the title of Forged in Fire champion. Butt’s episode of “Forged in Fire” will air Wednesday, July 31 at 8 p.m. 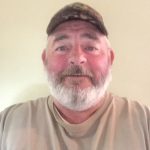 Butts began watching “Forged in Fire” after his brother-in-law’s recommendation and became what he called an “armchair quarterback,” commenting on the show based on his own skills and experience. His wife suggested he apply, and the process consisted of an application, forging a knife, a skype interview and a background check.

With a successful career in movie special effects under his belt, Butts said he felt prepared for the intensity of the competition but still found it extremely challenging.

“It pretty much challenged every aspect of me,” he said. Butts later added that after the competition, “I’ve never been so worn out in my entire life.”

However, he still said he would appear on the show again if given the chance.

Bladesmithing, as well as blacksmithing and carpentry, have long been hobbies of Butts’, and he said he enjoys being able to create something out of what was once just a large piece of metal. “I like taking something … and turning it into something special.”

Butts’ passion started as a child when he helped his father, a retired horseshoer, shape horseshoes in a coal forge. It continued as his stepfather, a professional welder, introduced Butts to his own craft. He later took a class from Robb Gunter, the head blacksmith at Sandia National Laboratories in Albuquerque, New Mexico, in the ‘90s and learned the art of ornamental blacksmithing. He kept the hobby for several years before losing access to a forge. Watching “Forged in Fire,” helped rekindle his passion.

He moved to Linden following a career in special effects in the movie industry using his skills in carpentry, blacksmithing and pyrotechnic effects and opened a remodeling business while also creating fireworks displays for events in Alabama and Mississippi including Christmas on the River and ChiLLy Fest.

Butts said he hopes to pass on bladesmithing to others to keep the craft alive.

“I would really love to find someone who was interested and teach it to someone,” he said.

(This article originally appeared in the Wednesday, July 31 issue of the Demopolis Times.)