On Sunday, July 28, members of the department responded to a truck fire on Hwy. 80.

Local firefighters received the initial call of a truck with a rear axle on fire at 1:17 a.m. The location was just outside the city limits to the west of Demopolis. The truck was driving in the east-bound lane. 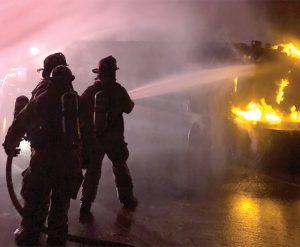 Upon arriving at the scene, firefighters discovered that along with a rear axle ablaze, the cabinet area associated with the tank of the truck was also on fire. The truck was hauling compressed hydrogen gas.

Initially responding at 1:22 a.m. with a single truck and two firefighters, the full situation was assessed and a apparatus and rescue truck were dispatched to the scene.

“We noted upon arriving that the fire was not contained,” said DFD Battalion Chief Michael Pope. “The cabinet area that housed the valves to the tank were also on fire.”

While firefighters were able to knock down the axle blaze with about a half tank of water, it took more to extinguish the fire in the cabinet.

“The rear cabinet was pin-locked and there was too much fire to access. We weren’t sure if there was fire inside that would blow out if we opened it,” Pope said.

Accessing a nearby hydrant provided the water needed to cool the area and once opened it took over an hour to extinguish that fire.

“It required a lot of water and time to get the tank cooled. Once it was cooled we were able to close the valves,” Pope said.

A second incident involved a downtown business, the office of Mason and Gardner Accounting on W. Jackson Street, on Tuesday, July 30.

The fire department was dispatched to the scene at approximately 8:04 p.m. and arrived at 8:07 to find heavy smoke coming from the building. Upon assessing the property, power was cut to the building and firefighters broke through he glass front door to gain access. 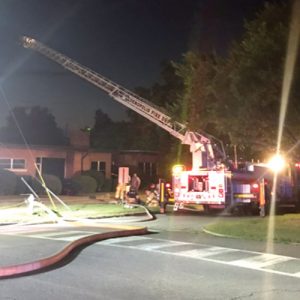 On Tuesday, July 30, a fire was extinguished at Mason and Gardner Accounting on W. Jackson Street.

After gaining entry, firefighters worked their way through, finding the source of the smoke to the left side of the building and were able to extinguish fairly quickly, according to Battalion Chief Greg Russell.

“We had some younger guys working on that shift and I’m very proud of how they responded. When you don’t know where the fire is … those are the dangerous ones,” Russell said.

Firefighters remained on the scene to investigate possible hotspots and gained access to the attached neighboring business, Hudgens Insurance, where only smoke was found. The scene was cleared at 12:27 a.m.

Rob Pearson of Mason and Gardner addressed the Demopolis City Council during a meeting Thursday, thanking the firefighters for their efforts.

“We want to thank the fire department for its quick actions and doing a great job in putting (the fire) out,” Pearson said.

Six firefighters initially responded and were joined by five others who were off-duty. The Livingston Fire Department also responded to provide assistance. An engine, rescue and ladder truck were mobilized.

Russell said the State Fire Marshal was called to the scene and that the cause remains under investigation.

(This article originally appeared in the Wednesday, August 7 issue of the Demopolis Times. Photos are provided by the Demopolis Fire Department.)