(These game summaries and photos were provided to the Demopolis Times by Barry Allen.)

West Alabama right-hander Mack Bradley recorded nine strikeouts in four scoreless innings and delivered a key RBI single in the four-run third inning in the 5-0 win over Wahepton (ND) at the 2019 Babe Ruth World Series at the Demopolis Sportsplex. 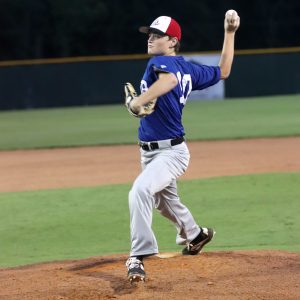 Bradley (1-0), who is a current freshman at Demopolis High School, struck out the side in the second and fourth innings. He ended all four innings with a strikeout. Bradley also struck out seven different batters in the win. He allowed two hits, walked two and hit one batter.

For his efforts, Bradley was awarded the Ron Tellefsen Player of the Game Award.

Whit Jockisch earned the save with three hitless innings of work. He finished with five strikeouts.

Bradley and Jockisch combined for 14 strikeouts in the opening round win.

West Alabama held a narrow 1-0 lead after three innings in a pitcher’s duel at Webb Field. Things changed quickly as West Alabama put the first five batters on base in the fourth inning to take a 5-0 lead.

Wahepton starter Ethan Manock, who held West Alabama in check through the first three innings, did not record an out in the fourth inning.

Jesse Marshall drew a leadoff walk and advanced to second base Montgomery Freeman reached on an error by shortstop Caden Kappes. J.P. Powell followed with an RBI single to score Marshall to make it 2-0. Jockisch walked and a pair of wild pitches allowed two more runs to cross the plate. Bradley then dropped an RBI single into right field to make the score 5-0.

Manock (0-1) allowed five runs and four hits with five strikeouts and four walks in the loss.

Ryan Baumgarner ripped a two-run, inside-the-park home run into the left-center field gap to extend the lead to 7-0 in the sixth inning. Baumgarner reached base three times

West Alabama took a 1-0 lead in the top of the first inning when Parker Phillips delivered a two-out RBI single that scored Kevin McElroy with the first run of the game.

Gavin Schroeder (Wahepton) was awarded the Ron Tellefsen Player of the Game Award. He was 1-for-2 with a walk and pitched three innings in relief.

Broomall-Newton (Penn.) scored six runs in the fourth inning en route to a 10-4 win over Jeffersontown (Kentucky) in the opening game of the tournament. The Mid-Atlantic champions took advantage of four walks and two errors in the fourth inning for the win. Joe Verrekia had the big hit in the inning with a two-run single. Mike Freeman and Alex Bruno had bases-loaded walks.

Broomall-Newtown (1-0) 3-1 lead with three runs in the second inning. Josh Freiling and Owen Mathes stroked RBI doubles in the inning, while Justin Brennen added an RBI ground out.

Jeffersontown scored a run in the first inning on back-to-back singles by Kyle Campbell and Hayden Rader.  Campbell eventually scored on a wild pitch for a 1-0 lead.

Broomall-Newtown tacked on run in the bottom of the sixth when Gavin Doney stroked a one-out double and later scored on an error.

Brennen was the winning pitcher. He worked five innings and allowed two runs and three hits with five strikeouts and four walks. Campbell was charged with the loss. He was touched for six runs in three-plus innings.

Brennen (Broomall-Newtown) and Warfield (Jeffersontown) were awarded the Ron Tellefsen Player of the Game Award. IN addition to his five innings on the mound, Brennen also added one hit, scored one run and one RBI. Warfield was 2-for-3 with one RBI for Jeffersontown.

Eagle Pass scored five runs in the bottom of the fourth inning in the 6-3 comeback win over Nashua. The Southwest Regional champions overcame a 2-0 deficit for the win.

Eagle Pass (1-0) took advantage of six walks and three errors by Nashua for the win.

Roberto De La Garza went 1-for-3 with two RBIs. He stroked a two-run single in the third inning. Isaac Stanwick went 1-for-2 with two runs scored and one RBI.

Ryan Bourgeios was a one-man show for Nashau. He finished 2-for-3 with three RBIs. Bourgeios had a two-run single in the second inning and added a RBI single in the fifth inning.

Donovan Becerra was the winning pitcher for Eagle Pass. He worked six innings and allowed three runs and four hits and struck out three batters. Alexander Paniagua pitched a scoreless seventh inning for the save.

Nolan Mederos was charged with the loss. He allowed six runs and three hits with five walks in three-plus innings.

De La Garza (Eagle Pass) and Bourgeios (Nashua) were awarded the Ron Tellefsen Player of the Game Award. In addition to his five innings on the mound, Brennen also added one hit, scored one run and one RBI. Warfield was 2-for-3 with one RBI for Jeffersontown.

Brett Dennis was the workhorse for the Southeast Regional champs. He tossed a complete-game on the mound and collected two hits and two RBIs at the plate. For his efforts, he earned the Ron Tellefsen Player of the Game Award.

Dennis (1-0) worked five innings and allowed two runs and three hits with six strikeouts. He went 2-for-3 with one double, two RBIs and one stolen base.

Phenix City (0-1) scored single runs in the first and third innings but could not maintain the 2-0 lead.

Hayden Wippert (Phenix City) earned the Ron Tellefsen Player of the Game Award. Wippert went 1-for-2 with one run scored, one double and one stolen base.