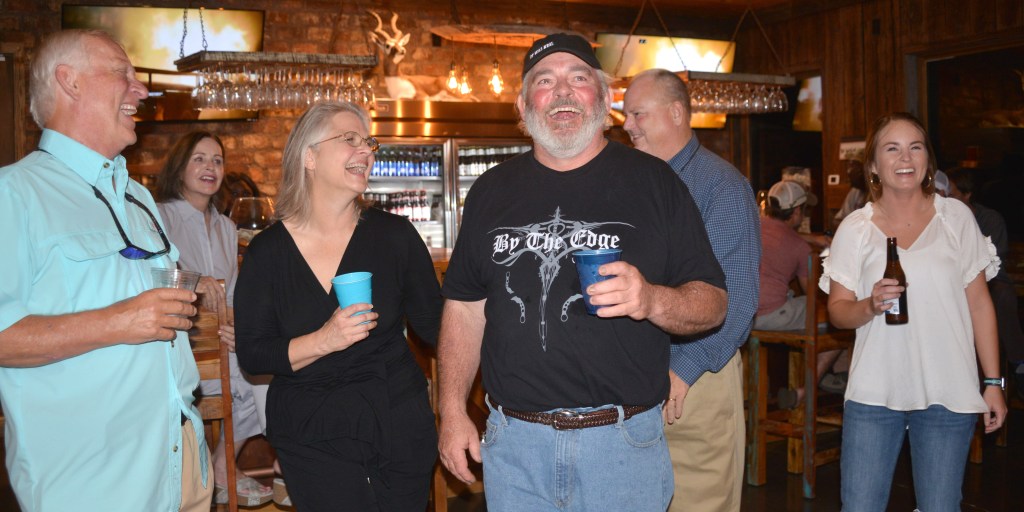 Doug Butts watches the moment he was named champion and won $10,000 while competing on “Forged in Fire” with friends and family at a viewing party at Soggy Bottom Lodge’s Shack 33 on July 31.

When Linden bladesmith Doug Butts tested his skills against three others on History Channel’s competition show “Forged in Fire,” he wasn’t competing against the other bladesmiths.

“We’re competing against ourselves,” he said. The ability to forge a winning blade depended solely on Butts’ own skills that he learned from a long line of mentors. 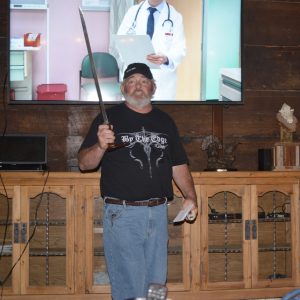 Doug Butts shows off his cane sword, which he recreated from his original version that was forged during the competition.

Though he went home with the title of “Forged in Fire” champion and $10,000, Butts said the competition tested his skills like nothing else and left him exhausted.

With a background in the movie industry, applying his skills in carpentry, blacksmithing and pyrotechnics to special effects, Butts was able to get in the right mindset. He understood how slowly things move behind the camera, and how, once he had a task before him, there was no time to wait. “No one can ever be waiting on us, so we run like the wind,” he said about his days creating special effects for movies.

There are four contestants that are eventually whittled down to one winner across two challenges. The first challenge gave the competitors four hours to create a pair of karambits. Up until the blades were unveiled at the start of the round, Butts didn’t even know what a karambit was.

Going in, Butts had a strategy of using an hour at the end of the first round to dedicate just to sanding and then spending the final half hour quenching. During the challenge, he could also be seen running to the two karambits displayed for reference to make sure he was getting the correct form, though he did receive criticism for the handles being one-and-a-half to two inches too long, even after he shortened them when given the chance to refine.

“Had I built a karambit before in my life, I probably would not have struggled with the handles being too long,” he said.

The first round included two parts and saw two bladesmiths eliminated, one after an initial judging and the other after strength and edge tests. Butts advanced to the final two and returned to his home forge in Linden to make a cane sword over four days, a unique challenge as it also required carpentry skills to fashion the cane surrounding the blade.

Butts had forged swords before, but they were broad, especially compared to the thin blade tucked into a cane.

The worst moment of the competition came in the final moments that Butts was working on the sword. He had just glued the pommel with epoxy before being instructed to begin packing it for shipment. During transit, anything could have happened to the pommel that could have cost him the win, such as it rotating or becoming off-center.

“That’s the one spot where I was terribly scared that things may not turn out very well for me,” he said.

Butts won “Forged in Fire” following praise for his cane sword and the blade of his competitor’s sword breaking during testing.

However, winning was not enough for Butts. When he came home, he recreated his karambits and cane sword to perfection. “It was important to me to come home and build those things in a proper manner,” he said.

The moment his win aired on television was shared with about 100 friends and family at a viewing party at Soggy Bottom Lodge’s Shack 33 on July 31.

“I’ve never been so honored in my whole entire life to have that many people come out and share this moment with me,” he said.

Butts has kept contact with the three other bladesmiths that were on the episode, and they were texting each other leading up to the premiere. “Those are three guys that are going to be friends of mine probably for the rest of my life,” he said.

At the viewing party, Butts stood before the crowd and thanked a long list of people that made his competing and the party to celebrate his achievement possible.

Trent and Lynn Hale – his brother- and sister-in-law – initially introduced Butts to “Forged in Fire” and contributed to the event’s catering. Mitchel and Melanie Hale – his father- and mother-in-law –  supported Butts in his career and passions for the past decade and contributed to renting Shack 33. Skibo Holman is the physical therapist whose weeks of shoulder therapy treatments allowed Butts to compete. Daryl Kirkham opened Linden Ace Hardware well past regular operation hours while Butts crafted his cane sword. Ben Mayton had a strong hand in the viewing party being held at Shack 33 and contributed to its rental. Elizabeth Hale also designed the event’s invitations. Many others also brought desserts to the event.

Butts took a special moment to thank his wife for her support and enthusiasm for his passions.

“Victoria has supported me no matter what crazy idea I have,” he said. “She’s the fire in my life. I can’t imagine life without her.”

The final note that Butts gave during his speech was a warning that he learned the importance of first-hand while competing. “Beware of anybody with a fat cane,” he said, unsheathing his cane sword. “It could have a sword it.”