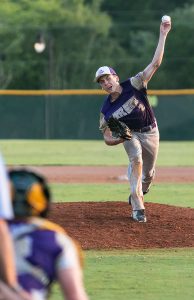 Drake Gabel was the star in the win for the Pacific Northwest Champions. As the leadoff hitter, he went 3-for-3 with one run scored and two sacrifice bunts. He was also the winning pitcher on the mound. He worked five innings and allowed two runs on six hits with four strikeouts and one walk. For his efforts he won the Ron Tellefsen Player of the Game Award.

Jack Fillion also had a huge game, going 3-for-6 with two runs scored and four RBIs.

West Linn batted around in the top of the first inning to take a 3-0 lead. Fillion’s two-run single highlighted a three-run opening frame.

Phenix City scored single runs in the third and fourth innings to cut the deficit to 3-2. Brandon Green plated the first run with a sacrifice fly in the third inning. Jason Tharpe made it a one-run game with a RBI double down the third base line in the fourth.

West Linn exploded for five runs on six hits in the sixth inning to break open a close game. Aiden Duea stroked a two-run single and Jake Holmes followed with an RBI double. Fillion and Gabe Howard had RBI singles and Max Wright capped the inning with an RBI double.

Duea had two hits and two RBIs in the win for West Linn.

Bryce Richey and Tharpe had two hits each for Phenix City.

Jeffersontown (KY) overcame an early three-run deficit, scoring in each of its last four innings to defeat Wahepton (ND) 5-4 in the 2019 Babe Ruth World Series at the Demopolis SportsPlex.

Landon Akers started the comeback as he delivered a two-run single in the bottom of the third inning to cut the deficit to 3-2.

Jeffersontown tied the game in the fourth when Ethan Elmore laid down a bunt single to score Camryn Warfield from third base.

Max Cherry gave J-Town its first lead of the game with an RBI triple in the bottom of the fifth inning. Michael Brewer, who reached on fielder’s choice, scored the go-ahead run.

J-Town added a huge insurance run when Warfield scampered home on a wild pitch to push the lead to 5-3.

The comeback was reminiscent of J-Town’s tournament run. After losing its first two games, Jeffersontown threw a no-hitter in Saturday’s win over West Alabama and then posted the thrilling comeback win on Sunday to advance in the tournament.

Wahepton (0-3) cut the lead to 5-4 in the top of the seventh inning when Jackson Fliflet ripped an RBI single to score Caden Kappes.  Gavin Schroder then reached on an error by third baseman Michael Brewer. Caden Hockert tried to score on the play but was thrown out at the plate by Landon Mallory to preserve the one-run lead. Jayden King flied out to center field to end the game.

Wahepton scored a pair of unearned runs in the top of the first inning and extended the lead to 3-0 on Ethan Mancok’s RBI single to score Kappes.

Chandler (Arizona) pitcher Josh Tiedemann tossed a complete-game shutout and scored the game’s lone run in the bottom of the first inning in a 1-0 win over Broomall-Newtown (Penn.) in a battle of undefeated teams in the Tombigbee River Pool.

Chandler (3-0) remains the lone undefeated team in the Tombigbee River Pool and will close out pool play against West Alabama on Monday at 7:15 p.m.

Tiedemann allowed only three hits in seven scoreless frames. He struck out three batters and did not allow a walk.

His counterpart, Broomall-Newtown pitcher Jim Wigo, was equally impressive on the mound.

Wigo took a no-hitter into the sixth inning before Rohan Lettow broke up the no-hitter with two outs in the sixth inning. Wigo allowed one unearned run and one hit in six innings with five strikeouts and one walk.

Wigo also had one of the three hits by Broomall-Newtown off Tiedemann.

Tiedemann scored the only run of the game following a first-inning error by Broomall-Newtown, who finished the game with three errors.

To no surprise, Tiedemann and Wigo were the Ron Tellefsen Player of the Game Award winners.

Broomall-Newtown faces Wahepton (ND) in the final game of pool play on Monday at 7:15 p.m. (CT).

Fort Caroline (Fla.) batted around in the second and fifth innings and cruised to 17-1 win over Nashua (NH) to remain undefeated in pool play. The game was called after five innings due to the 10-run rule.

Dennis was also in on the scoring action in the 7-run fifth inning with an RBI single to right. Parker Sedgwick stroked a two-run double to right-center field in the inning. Colin Rust, Cooper Whited and Kyson Witherspoon posted three straight RBI singles in the inning.

Jimmy Broughton had a two-run single in the first inning to start the scoring barrage.

Dennis went 2-for-5 with two runs scored and three RBIs in the win.

Sedgwick (1-1, 3 R, 2B, 2 RBI, BB, 2 HBP) reached base in all four plate appearances and scored three runs. He also pitched four scoreless innings on the mound to earn the win. He allowed one hit and struck out four batters to win the Ron Tellefsen Player of the Game Award.

Nashua (1-2) avoided the shutout with a run in the bottom of the fifth inning. Colin Holbrook, Nate Smith and Nolan Mederos all singled and Holbrook scored the lone run of the game on Sam Murray’s ground out.

Albert De La Rosa (1-for-2) won the Ron Tellefsen Player of the Game Award for Nashua.