The West Alabama 14U Babe Ruth team began the Babe Ruth World Series pool play in strong fashion with a victory, but fell short of making the tournament round.

Bradley, a freshman at Demopolis High School, struck out the side in the second and fourth innings for a total of seven He allowed two hits, walked two and hit one batter. For his efforts, Bradley was awarded the Ron Tellefsen Player of the Game Award. 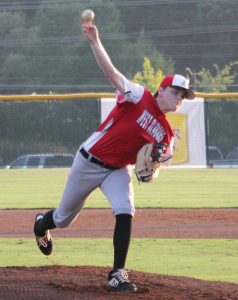 Mack Bradley led the West Alabama squad to an early win in pool play, a shutout against Wahepton.

Whit Jockisch earned the save with three hitless innings of work, finishing with five strikeouts.

West Alabama held a narrow 1-0 lead after three innings in a pitcher’s duel at Webb Field. Things changed quickly as West Alabama put the first five batters on base in the fourth inning to take a 5-0 lead.

Jesse Marshall drew a leadoff walk and advanced to second base Montgomery Freeman reached on an error by shortstop Caden Kappes. J.P. Powell followed with an RBI single to score Marshall to make it 2-0. Jockisch walked and a pair of wild pitches allowed two more runs to cross the plate. Bradley then dropped an RBI single into right field to make the score 5-0.

Ryan Baumgarner ripped a two-run, inside-the-park home run into the left-center field gap to extend the lead to 7-0 in the sixth inning.

West Alabama took a 1-0 lead in the top of the first inning when Parker Phillips delivered a two-out RBI single that scored Kevin McElroy with the first run of the game.

The next night, West Alabama took its first loss of pool play by a 7-3 score against Broomall-Newton, Pennsylvania.

Broomall-Newton scored six runs in the top of the fourth inning leading to the victory. The Mid-Atlantic Regional champions sent 10 batters to the plate in the inning to break open a tie game.

West Alabama scored in the bottom of the fourth when Parker Phillips singled and scored on Jesse Marshall’s infield ground out. They added another in the sixth inning on a pair of two-out hits by left fielder Jesse Marshall and pinch-hitter Mack Bradley.

John Powell had a two-out RBI single in the bottom of the first to open the scoring for West Alabama.

On Monday evening, Chandler, Arizona scored an unearned run in the top of the seventh inning for a thrilling come-from-behind 4-3 win over host West Alabama to cap an undefeated record in pool play.

Chandler (4-0) is the No. 1 seed after going undefeated in Tombigbee Pool play. 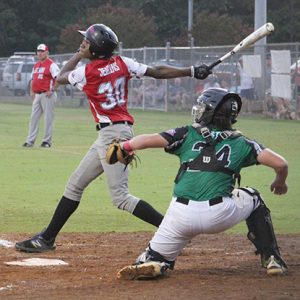 K Jenkins watches after making contact during West Alabama’s game against Chandler. Jenkins would collect a hit, but was stranded on base for the West Alabama All-Stars.

West Alabama (2-2) took a 3-0 lead after two innings without benefit of a hit. Ryan Baumgarner reached on a fielder’s choice in the first inning and stole second and third base, before scoring on a throwing error by catcher Hayden Estes.

West Alabama extended its lead to 3-0 with a pair of runs in the second inning. Kevin McElroy walked and eventually scored on a passed ball and Montgomery Freeman plated a run with a ground out. McElroy was 1-for-2 with one run and one walk.

Trailing 3-0 after three innings, Chandler tied the game with three runs in the top fourth. Cooper Brass ripped a three-run double into right-center field to tie the game at 3-3.

Ryan Kucherak led off the seventh inning with an infield hit and then moved to third base on a throwing error. Kucherak scored the winning run on a wild pitch.

Brass (Chandler) and McElroy (West Alabama) were the Ron Tellefsen Player of the Game Award winners.

With the completion of pool play on Monday, the single-elimination championship pairings were set.

The series began Tuesday and continues through Thursday, Aug. 15. All games will be played at Webb Field at the Demopolis Sportsplex. Tickets are $12 for adults and $5 for children each day.

The top three teams to advance from the Tombigbee Pool are Chandler,Arizona); Broomall-Newtow, Pennsylvania; and Jeffersontown, Kentucky.

Chandler (4-0) is the No. 1 seed from the Tombigbee Pool play while Fort Caroline (4-0) won the Black Warrior Pool.

On Wednesday, games begin at 4:30 with the winner of the Jeffersontown/Eagle Pass contest taking on Chandler. The winner of West Linn-Broomall/Newtown contest will battle Fort Caroline at 7 p.m. The Babe Ruth World Series Championship Game will be played Thursday, August 15, at 6 p.m.