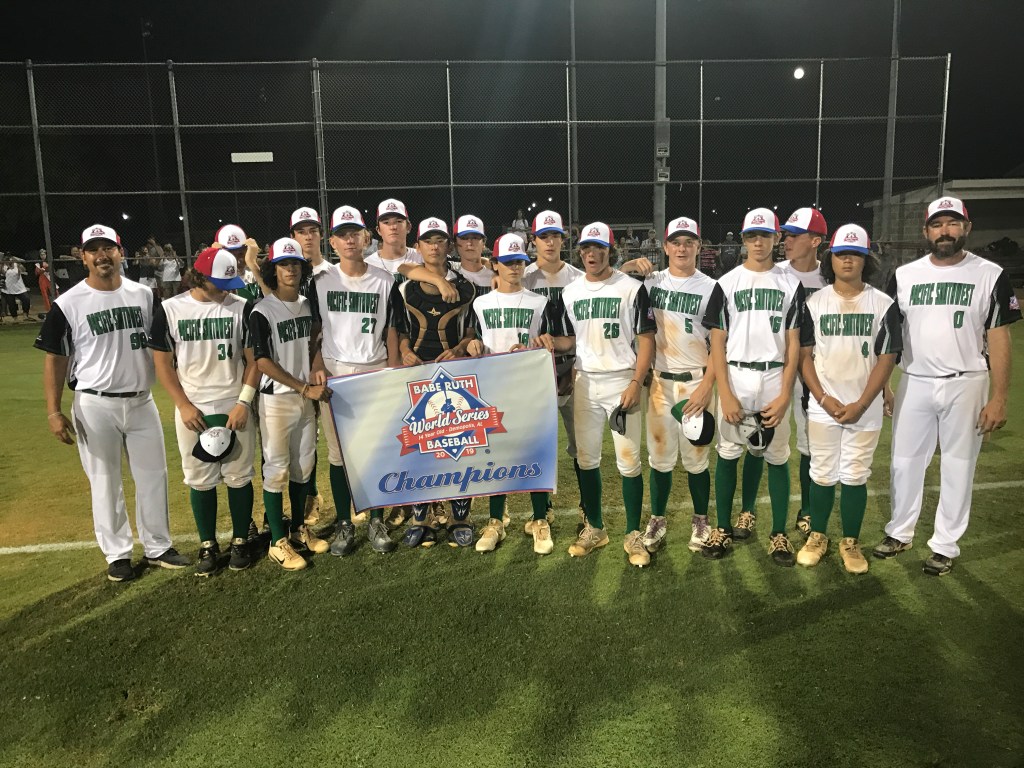 Chandler, Arizona pitched their way to the Babe Ruth World Series championship game. On Thursday, they won the 2019 14-Year Old World Series Championship with an early offensive explosion and another lock down performance on the mound by Josh Tiedemann.

Chandler (6-0) scored four runs in the first inning and cruised to a 6-2 win over previously unbeaten Fort Caroline 0-0 at Webb Field at the Demopolis SportsPlex to wrap up the 25-game event.

“It’s absolutely amazing, these guys work so hard all summer long,” Chandler head coach David Hitchcock said. “This is something special and they deserve it. I am happy to continue the tradition that Tony Valdez started.”

Chandler got off to fast start with four runs in the top of the first inning to take a 4-0 lead. It marked just the second time in the World Series that Fort Caroline has trailed. Fort Caroline had a 2-0 deficit in their opening game against Phenix City.

Ryan Kucherak drew a leadoff walk and moved to third base on Cooper Brass’ single down the right field line. After Tiedemann walked to load the bases, Kole Klecker added to his tournament RBI total with a two-run double down the right filed line to put Chandler on the board. Logan Krei followed with an RBI ground out and Liam Wilson collected his first hit of the tournament with an RBI single up the middle to cap the four-run frame.

The Pacific Southwest Regional champions extended the lead to 6-0 with two more runs in the second inning. Will Shelor reached on a one-out infield single and moved to second on a subsequent throwing error by shortstop Kyson Witherspoon. With two outs, Brass and Tiedemann followed with back-to-back RBI singles to push the lead to six runs.

Fort Caroline starter William Rollings left the game with two outs in the inning with an apparent injury. He allowed six runs and seven hits in 1 2/3 innings with two walks and two strikeouts.

Fort Caroline stranded eight base runners in the first three innings, including the bases loaded in the first and third innings.

The Southeast Regional champions scored two runs in the second inning. Jesus De Jesus drew a one-out walk and scored on Kyson Witherspoon’s triple into the right-center field gap. Witherspoon later scored on wild pitch to cut the deficit to 6-2.

Fort Caroline loaded the bases again the third and chase starter Logan Krei, who walked seven and hit on batter in 2 2/3 innings. Chandler brought in right-hander Josh Tiedemann, who struck out Cooper Whited to keep Fort Caroline off the board. He earned the Ron Tellefsen Player of the Game Award.

“I went out the mound and tried to let them hit the ball and we ended up winning,” Tiedemann said. “I wanted to throw strikes.”

In all, Fort Caroline stranded 13 base runners in the loss.

Tiedemann (2-0) closed out the game with 4 1/3 scoreless innings. He allowed two hits, one walk and struck out five. For his efforts, he was named the 2019 Babe Ruth World Series Most Outstanding Player.

“My pitches were working, especially my slider and fastball,” Tiedemann said.

He posted a 2-0 record on the mound with 11 1/3 scoreless innings and 11 strikeouts. He had a complete-hit shutout in the 1-0 win over Broomall-Newtown to clinch the Black Warrior Pool. He also added three hits and scored five runs.