Officials at Demopolis High School has announced a new traffic flow for exiting the campus following this season’s football games.

Tiger Lane, the main street into, and out of, the school will be turned into a one-way, exit-only, street beginning with 2 minutes remaining in the fourth quarter through 20 minutes after the game. 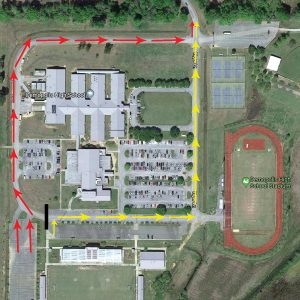 Tiger Lane, the entry drive into Demopolis High School, will turn into a one-way, out-bound only, street at the end of home football games this season.

Those picking up students should make arrangements to arrive early or late, prior to the street becoming one-way. “During that time, everything will be out-bound,” said Principal Blaine Hathcock.

Those in the student parking area and in front of the stadium will exit along the front of the campus and will remain in the right-hand lane. That lane will be forced to right onto Hwy. 80.

There will be traffic controllers at the west parking lot and on Hwy. 80 to guide drivers.

“Traffic after games has been an issue and we feel that we can make a lot of progress, and keep traffic flowing, by turning Tiger Lane into an exit-only street for about 20 minutes. We appreciate everyone working with us on this,” Hathcock said.

(This article originally appeared in the Wednesday, August 21 issue of the Demopolis Times.)