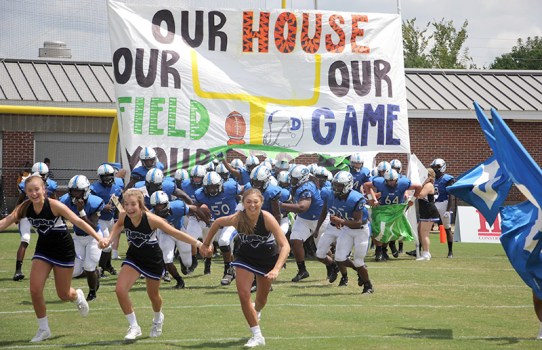 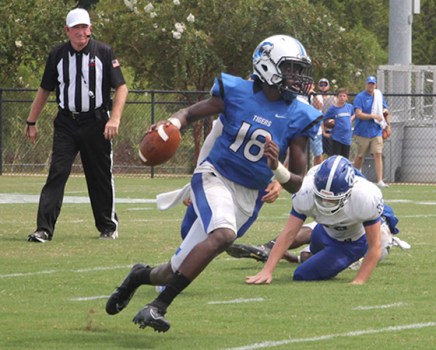 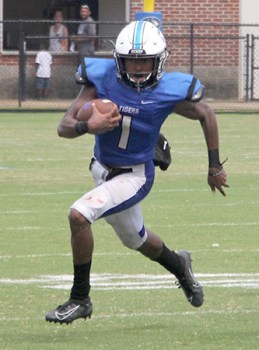 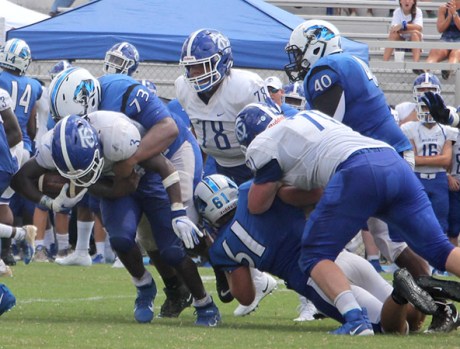 Curtis Peagler drags down a Wildcat 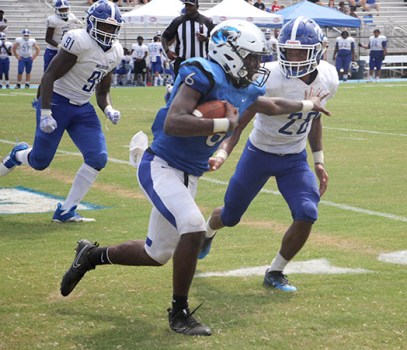 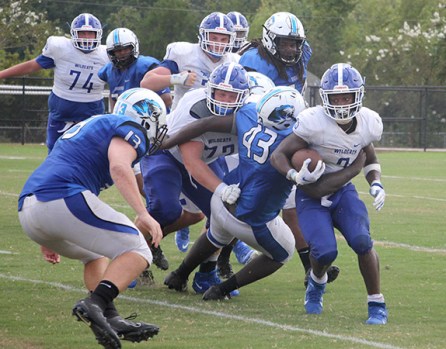 Avake Jones holds up a runner as Hayes Atkins closes in 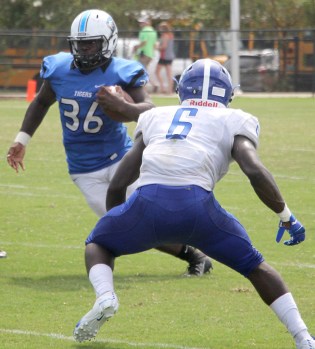 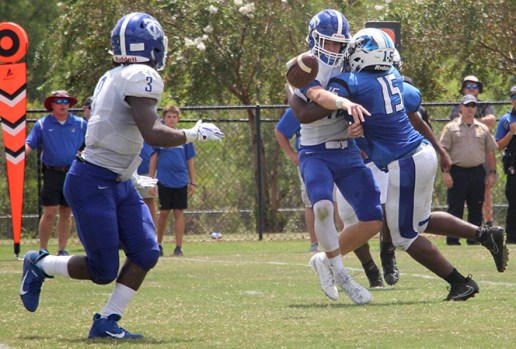 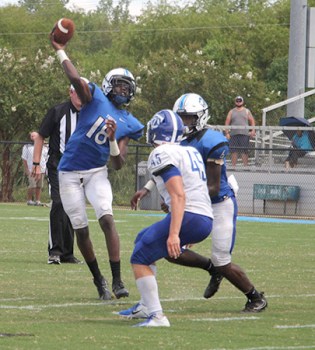 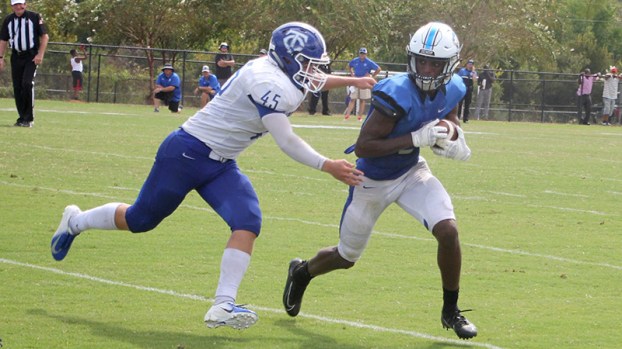 Timothy Grayson looks to slip past a defender.

The Demopolis offense was plagued with untimely errors throughout the first half, but the defense kept the team in striking distance as a second-half surge lifted the Tigers to a 14-8 victory over Tuscaloosa County.

The Tiger offense had a total of five turnovers in the game, two of which directly led to field goals and another for a safety, giving the Wildcats an 8-0 edge in the first. After finding some rhythm in the second half, the Tigers managed to take the lead and held it thanks to several key turnovers by the opposition.

After a quick three-and-out on the Tigers’ first possession, the Wildcats drove deep into Demopolis territory, but stalled when a third-and-12 pass into the endzone was well covered by junior cornerback Jay Jones. A bad snap on the field goal attempt helped the Tigers keep the game scoreless.

On the Tigers’ following possession, a bad pitch back led to a fumble recovery for Tuscaloosa County at the 17-yard line. The Tiger defense stiffened, forcing another field goal attempt, which this time was well-played, giving the Wildcats a 3-0 lead.

In the second quarter, offensive miscues continued to haunt the Tigers. Deep in their own territory, a fumble had to be knocked out of the endzone by quarterback Peyton Stevenson, giving the Wildcats a 5-0 lead.

With just over 2 minutes to go in the half, the Tigers once again fumbled deep in their own territory, giving Tuscaloosa County possession at the 9-yard line. But, once again, the defense held strong, forcing fourth down after senior Cody Hinton broke up a pass into the endzone. A field goal attempt was good, leading to the 8-0 halftime edge for the Wildcats.

The Tiger offense began to find momentum in the second half. After a missed field goal attempt by Tuscaloosa County, the Tigers took possession at their own 20-yard line. With the help of a couple TC penalties, the Tigers was in position to score their first points of the season, but at the 3-yard line once again fumbled the ball away, the fourth of the game for Demopolis.

The Tiger defense made quick work of the Wildcats, forcing a three-and-out.

After a nice return by senior C.J. Williams, the Tigers gave the ball right back with their fifth fumble.

The defense kept Demopolis in the game again, forcing another punt, this one being a short one setting the Tiger offense up at their own 42-yard line in the fourth quarter.

A short pass from Peyton Stevenson to Timothy Grayson was good for 6 yards and TC was called for pass interference on the following play. A couple of runs by Graig Nichols put Demopolis in the red zone, at the 15. A couple plays later, the Tigers lost yardage on a sack, setting up a pivotal 3-and-9 play from the 14-yard line. Stevenson took a hit as he threw the ball, but managed to hit Grayson in the endzone for the touchdown. The two-point conversion was no good as Demopolis still trailed, 8-6, with 6:03 remaining in the contest.

Tuscaloosa County got a nice return on the kickoff, out to midfield. On the first play from scrimmage, the Wildcats found some running room, but dropped the ball as Tiger Alton Rowser came away with a big fumble recovery for the Tigers.

From their own 43-yard line, the first play of the possession went to Nichols who found a hole through the middle of the Wildcat defense and sprinted 57 yards into the endzone, giving Demopolis the lead. Grayson took the ball around the left corner to add the 2-point conversion as Demopolis took the 14-8 lead.

Tuscaloosa County threatened on their next possession. From the Demopolis 25, the Wildcats found a lot of running room, but the ball carrier dropped the ball and Tiger Mac Logan pounced on it to end the threat, allowing Demopolis to run some more time off the clock.

DHS secured the victory when Tuscaloosa County fumbled the ball away on a punt return.

The Tigers will be back at home on Friday, August 30, hosting Northridge. Kickoff is 7 p.m.