(Editor’s Note: This the second in a five-part series focusing on new services at Whitfield Regional Hospital.)

Dr. Jeffrey Smith, a cardiologist, recently joined the Whitfield Regional Hospital, working in two-week intervals between WRH and a hospital in Wisconsin through November. CEO Doug Brewer said he hopes Smith’s move into a full-time cardiologist at the hospital will start in December. 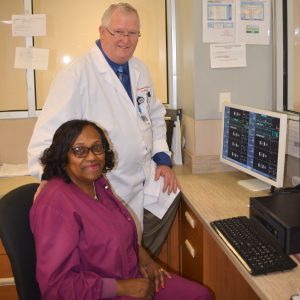 WRH and Smith are currently building the cardiology program to meet the specific health needs of the community. Smith currently performs several primary cardiological services such as diagnostics and echoreads with his time split between clinic appointments at Two Rivers Surgical Associates and consulting with other doctors who require the opinion of a cardiologist for their patients.

While many cardiology patients will no longer need to be transferred out to receive care as a result of Smith being on staff, he also said that being available for consultations allows other specialists and physicians to treat a patient in other capacities while having their cardiology concerns for the patient’s health addressed without the need to transfer.

“Every additional thing you have that you can bring to the table has a multiplicative effect,” Smith said.

Brewer also said the population of WRH’s primary service area has high rates of diseases and conditions such as diabetes and congestive heart failure that make the inclusion of a cardiologist a large benefit to the community.

“So many people here are touched with cardiac issues that it limits a lot of patients that couldn’t come to us otherwise,” he said.

Prior to Smith’s addition, a cardiologist would have clinic hours at the hospital once a month, but Smith is the first cardiologist on staff for WRH.

Smith received his board certification for internal medicine in 1994 and in cardiology in 1997. He earned his Doctorate of Medicine at the University of Hawai’i. He is a member of WRH on a “locums-to-perm” basis allowing both Smith and the hospital a trial period before full-time commitment.

To make an appointment with Smith, call Two Rivers Surgical Associates at 334-287-2842.

(This article originally appeared in the Wednesday, August 21 issue of the Demopolis Times.)