After four years of serving as the Demopolis Public Library children’s librarian, Kathy Owings has taken the reigns as library director.

Owings served as interim director for four months while the library’s board of directors looked to fill the position. Her first official day was August 5. 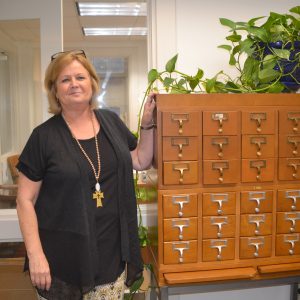 Kathy Owings has been named the director of the Demopolis Public Library. She served the library as children’s librarian for four years.

Owings spent 26 years in elementary education in California and Louisiana and accepted the position at the library in order to return to her hometown and be involved in the community.

“I just felt that it was perfect for someone who’d been in education all their life,” she said.

She was in charge of the summer reading programs, arranging presenters and activities for the children throughout the year, scheduling Lunch & Learn events, coordinating with Friends of the Demopolis Public Library to fill any needs and keeping statistics about the library and its patrons.

Having slowly added duties to her job as children’s librarian as well as served as interim director twice – she also temporarily led the library during another two-month period in 2018, – Owings felt ready to take on a bigger role at the library.

“That’s where my heart had been, but I think there comes a time when you’re ready to grow and do new things,” she said.

As director, Owings also manages the facility, such as upkeep and billing, leads the staff and works to grow the library to fit the needs of the community. Owings said a new website is also in the works.

“If there is a book or anything that the community expresses a need for, we try to accommodate that as best we can,” she said.

The role of children’s librarian is currently being filled by Owings and other staff and volunteers, but the search is on for a permanent staff member.

To apply, visit the job listing on indeed.com, the Demopolis Career Center or the library. Resumes can also be emailed directly to Owings at library.director@demopolisal.gov.

(This article originally appeared in the Wednesday, August 28 issue of the Demopolis Times.)