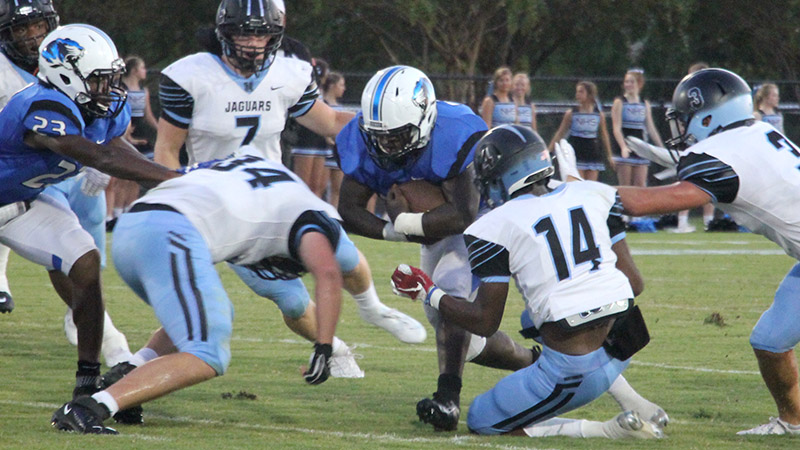 Freshman runningback Graig Nichols rushed for 96 yards, most of that coming in the second half. PHOTOS BY SAMUEL BLANKENSHIP

Demopolis High School starts the 2019 season at 2-0 after defeating the 6A Northridge Jaquars, 13-0.

The defense led the charge for the Tigers, not just in dealing the shutout, but also scoring the first points of the game on a fumble returned for a touchdown.

The Tigers held the Northridge offense to 127 yards and recovered three fumbles, including one of those returned for a touchdown by Mac Logan. Matthew Witherspoon led the team in tackles with six, including one sack, while Hayes Atkins added five and Jay Jones finished with four. C.J. Williams, Logan, Alton Rowser, and Gray Sharpe each had three. Sharpe and Curtis Peagler each assisted in a sack. 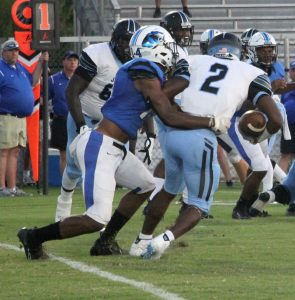 Jay Jones makes a tackle behind the line of scrimmage for the Tigers.
PHOTOS BY SAMUEL BLANKENSHIP

The Demopolis offense finished with a total of 228 yards. Quarterback Peyton Stevenson threw for 87 yards while the rushing attack produced a total of 141. The running game was led by freshman Graig Nichols with 96 yards on 29 carries while Stevenson added 66 yards on the ground.

Early in the first quarter, Demopolis after taking possession when Detron Essex recovered a Northridge fumble. Quarterback Peyton Stevenson found Jaqualon Smith for an 8-yard gain and later the junior quarterback converted a fourth down play with a keeper for 9 yards to the 19-yard line. Another pass to Will Cork was good for nine yards and consecutive runs by Graig Nichols got the Tigers to the 2. But, the Tigers drive ended there when the ball was fumbled and recovered by Northridge at the 5-yard line.

For most of the first quarter it remained a defensive battle and it was the Demopolis defense that put the first points on the board. With about 4:15 to go in the half, Tiger linebacker Mac Logan picked up a fumble and returned about 50 yards into the endzone. Justin Bedwell’s point-after made the score 7-0.

After getting the ball back, the Tiger offense put up some points. On third-and-10 from their own 29, Stevenson found senior receiver C.J. Williams who took the ball 69 yards to the Northridge 27. A pass interference call aided the Tigers on a fourth down play and two snaps later, Stevenson connected with Shatarius Williams at the back of the endzone to increase the lead with 25 seconds remaining in the first half. Bedwell’s point-after attempt was no good, making the halftime score 13-0. 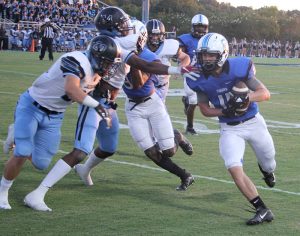 Will Cork picks up positive yardage after a catch early in the game.

Neither team would score in the second half, but the Tigers did have a better half on the offensive side of the ball. Most notably, DHS got its running game going with a long, sustained drive that went 90 yards, from their own 5-yard line to the Northridge 5. The drive featured the running attack of Nichols and Stevenson, but it ended when Stevenson dropped back for a pass and lost the ball, resulting in a fumble.

The Tigers sealed the victory when DHS senior Aaron Collier came away with an interception with about a minute and half to go in the game.

Among the leaders for the Demopolis offense was Nichols, a freshman, who ran for 96 yards on 29 carries.

The Tigers are 2-0, defeating 7A Tuscaloosa County in Week 1 and this week 6A Northridge.

Region play begins next week when the Tigers travel to Bibb County. Kickoff is 7 p.m. in Centreville.