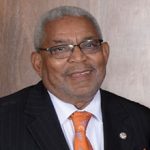 “Commissioner Armstead deserves the gratitude of all Alabamians for his dedication to public service and his personal sacrifice,” said 2019-2020 ACCA President David Money. “Considering the extraordinary challenges county commission members face every day, Commissioner Armstead has continuously served his constituents with honor and pride, and he deserves a pat on the back from everyone in Marengo County.”

ACCA annually presents the Tenure in Office Award to honor commission members who have served for at least 16 years in office. The award is given for four-year increments thereafter.

(This article originally appeared in the Wednesday, September 4 issue of the Demopolis Times.)