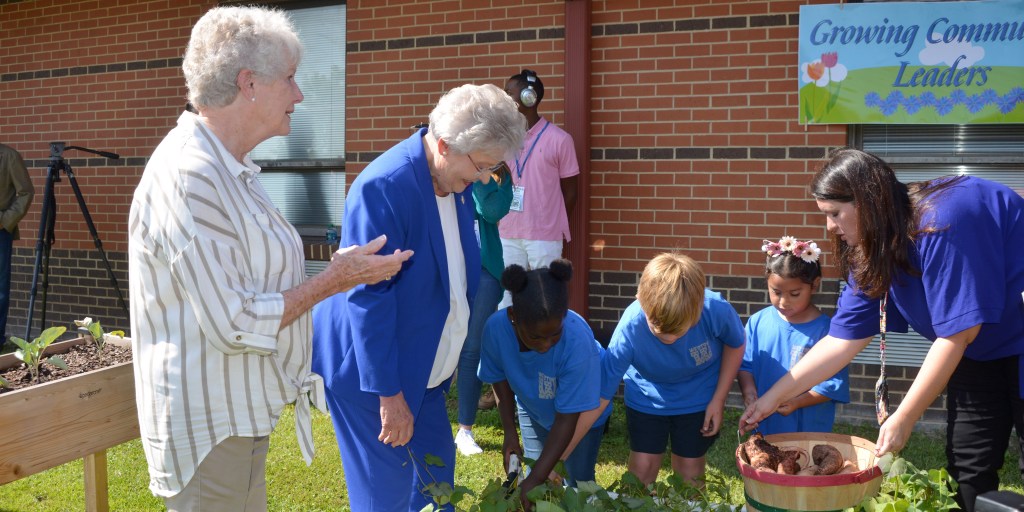 Westside Elementary School club members presented Gov. Kay Ivey and Rebecca Culpepper of the Demopolis Food Pantry a basket of sweet potatoes that were grown in the garden and will be donated to the pantry. Pictured, from left, are Culpepper, Ivey, Mariah Jones, Bryce Meadows, Cristy Valderos and club sponsor Gabrielle McVay.

Gov. Kay Ivey visited Westside Elementary School on Tuesday to see the school’s community garden in action as part of her Alabama Bicentennial School tour. The garden was created from a grant that WES received when the school received the honor in 2018.

Principal Tisha Lewis welcomed Ivey to the school and to the City of Demopolis, which Lewis called the most hospitable and community-driven city in the state.

Lewis also praised the work of Community Garden Club Sponsor Gabrielle McVay and the club for their hard work in caring for the garden.

“[They] have worked hard to cultivate the garden, and its produce,” she said, adding “That has not been an easy task thanks to the Alabama heat.”

Student and garden club member Janaiya Morris explained to Ivey that the club recently planted some fall produce, including broccoli and mustard greens. She also said the food that the garden produces will benefit the community.

“When the food is harvested, it will be donated to our local food pantry,” Janaiya said.

Superintendent Kyle Kallhoff introduced Ivey sharing some of the governor’s life before politics and her achievements in her career thus far, most notably Ivey being the first state treasurer to serve from the Republican party since the Reconstruction Era during her terms from 2003-2011, the first Republican woman to serve as lieutenant governor during her terms from 2011-2017 and the first Republican lieutenant governor to be reelected to the office. Ivey was sworn in as governor in 2017 following the resignation of former Gov. Robert Bentley and was elected to serve a full term in 2018.

Ivey described her time commemorating the state bicentennial and said that one of her earliest public events as governor was speaking at the grand opening of the states’ three-year bicentennial celebrations in Mobile in 2017. In order to ensure that the celebrations spread as far across the state as possible, Ivey made efforts to include children in the bicentennial events.

Ivey issued a challenge to students to become involved and make a difference in their communities. WES met that challenge by creating the community garden.

“Developing strong leaders today ensures us of having quality leaders for the future, and it makes me proud to see that Westside Elementary has made this such a high priority,” Ivey said. “The Growing Community Leaders project and your impressive community garden truly reflects the spirit of the Alabama bicentennial, and I hope you’ll continue to inspire us and show us ways that we can make our state an even better place.”

Ivey then presented a bicentennial book titled “Alabama My Sweet Home” to Lewis for the school’s library, and Westside’s gardening club presented Ivey and Rebecca Culpepper of the Demopolis Food Pantry a basket of sweet potatoes that were grown in the garden and will be donated to the pantry.