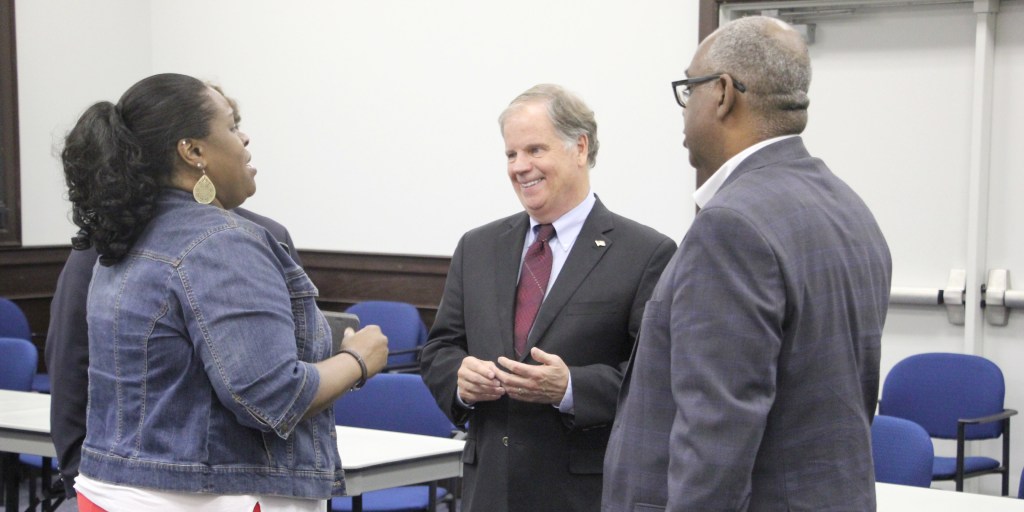 The Second Annual State of the Black Belt Summit covered topics such as environmental justice, entrepreneurship and academic and community efforts to improve quality of life in the area, spanning from 9 a.m. to 4 p.m. on Friday.

Demopolis Mayor John Laney opened the summit by sharing details of a recent conference he attended in Atlanta that centered on smart cities, which are cities that incorporate technology to enhance urban services and quality to life.

“What I found out when I got there is that a smart city is a city that does not leave it’s people behind,” he said, explaining that simply utilizing the latest technology cannot improve the city if residents themselves do not have the internet access required to apply to a job online.

Laney also thanked Wallace Community College and WCC President Dr. James Mitchell for strengthening Demopolis’ focus on workforce development and job training. “One of the big myths we have to dispel is that we don’t have a workforce,” he said.

Mitchell also expressed gratitude to the City of Demopolis and Marengo County for welcoming WCC to the Demopolis Higher Education Center before saying that  it will take everyone working together in order to make a difference the Black Belt.

Mitchell also urged that more action be taken to benefit the Black Belt, explaining that the area and its communities “have been studied to death.”

“I just want you all to know that Wallace Community College stands ready to work with each and every one of you to make that happen,” he said.

Dr. Mark McCormick, Provost of Academic Affairs at Stillman College, told attendees that “For over 143 years, Stillman has been a gateway of opportunity for the population, individuals of the Black Belt and beyond.” He said that gateway led to alumnus Rev. William Sheppard traveling to the Congo as a missionary for the Presbyterian Church.

Black Belt Community Foundation President Felecia Lucky gave the history and purpose of the foundation, which was founded after a study revealed that the average per capita grant-making amount was $451 for the country, $130 for Alabama and $41 for the Black Belt.

After two separate efforts headed by Dr. Carol P. Zippert and David Wilson were combined to form the BBCF in order to provide a vehicle for funding in the early 2000’s, the organization has since put nearly $5 million into the Black Belt, representing 200,000 people and 12 counties.

“We are doing the work, so we should also have resources to do that work,” Lucky said.

She described the BBCF as having been founded as a three-legged stool. The organization provides funding to non-profit groups that will benefit the Black Belt, builds an endowment that offers matching funds to county supporters that will go back to the represented area and works to maintain a consistent donor base that strengthens their position as a community foundation.

The founder of the State of the Black Belt Summit, ReSheda Workman, said she created her organization, Black Belt Roots, as a way for people to come together to discuss the challenges that the Black Belt faces. She eventually expanded the group to include positive stories found in the Black Belt and to host the summit.

Dr. Mark Elliott, associate professor of environmental engineering at the University of Alabama, provided and environmental justice update detailing what new information has been found and progress has been made since the first State of the Black Belt Summit in 2018.

His presentation focused on wastewater management, which has been a challenge for some areas in the region due to the soil found in the Black Belt becoming impenetrable when wet causing waste to back up. The issues with wastewater management create unhealthy environments for residents. Though Elliott said the overall health and environmental impacts have yet to be determined, the economic limitations have been clearer.

“You won’t find fast food restaurants or hotels or motels in areas where there is not reliable wastewater treatment,” he said.

Elliott also said possible solutions would include expanding sewer systems, identifying cost-effective treatment technology and adding decentralized treatment systems to clusters of homes not connected to a city’s sewer. Other activities involving wastewater management include the Center for Disease Control and Prevention funding a health study conducted by the University of Alabama at Birmingham and Georgie Institute of Technology and the formation of the Consortium for Alabama Rural Water and Wastewater.

Reba Love, case work manager for Rep. Terri Sewell, updated attendees on the legislative push to improve wastewater management. In addition to the $1.8 billion in funding Sewell secured in 2018, she has worked with other representatives and senators to secure $718 million for Fiscal Year 2020. Fifteen million of the $718 million was specifically allocated to Sewell’s Rural Septic Tank Access Act that was passed in 2018’s Farm Bill. Love said that Sewell’s office is moving forward to continue securing funding to benefit the Black Belt and improve wastewater management.

Serving as the keynote speaker for the event was Jo Bonner, who is a former U.S. Representative and currently serves as Chief of Staff for Governor Kay Ivey.

Bonner’s message was that the communities of the Black Belt, along with state and federal officials, should work together to advance the region.

While the state is experiencing economic successes, Bonner admits the Black Belt has been left out of many of those achievements.

“Our unemployment rate is the lowest in the state’s history — lowest in the Southeast, including Texas, North Carolina, Tennessee. More people are working right now than ever before in our state’s history. While these numbers are important because they show progress, there are areas, like the Black Belt, where we can do more,” Bonner said.

“But, success doesn’t just happen. It happens when people from all walks of life work together,” he added. “The Black Belt specifically, isn’t just a special place to live, it has a lot of opportunities, but a lot of challenges to meet. We can’t control what is happening in Iran, Mexico, Russia, be we can control what happens in Alabama. That is our challenge and that is our opportunity.”

“There are positives, but still many challenges. Every county is losing population and that population is aging; our young people are not staying. We have challenges with workforce development, broadband access … the state ignored the area for so long,” Jones said.

A key to success, according to Jones, is educating and training young people for the realities of today’s job market.

“We have to reach into our schools and better educate students about the realities of career tech jobs,” he said. “We need to get kids into the Mercedez Benz plant and let them see first-hand these high-tech, good paying jobs. These are the type of jobs that will build our middle class.”

He said that while recent efforts to expand the Medicare Wage Index will benefit many people, the state should work to expand Medicaid as quickly as possible.

“What we need to do is expand Medicaid. We need to get past the politics and do what is right,” he said. “We are getting a second bite at that apple and we can’t afford not to expand Medicaid. It’s too much money, and, it’s our money going to other states.”

Jones also addressed some successes in acquiring funding for infrastructure improvements across the Black Belt as part of last year’s Farm Bill and feels there will be more bills passed this year.

“I know (infrastructure) is a serious issue for many counties around here. While we’ve had some success, we need to keep working.”