The former Auburn University football coach will be available to meet with voters during a meet and greet event from 8 a.m. to 9 a.m. at Rooster Hall and again at Mr. G’s restaurant beginning at noon. 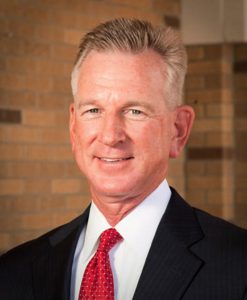 Tuberville is a native of Arkansas and became the head coach at Auburn in 1998. In 2004, his team went 13-0. Following stints at Texas Tech and the University of Cincinnati, Tuberville retired from coaching in 2016.

In running for U.S. Senator, Tuberville states, “I am running for the United States Senate because I believe liberals in Washington are out-of-control. I believe the first duty of government is to protect our individual liberty. I will be a leader in Washington fighting for smaller government, less taxes, and our national sovereignty. I am running to defend the Constitution, and I understand that the freedoms we enjoy must be protected and preserved for future generations.

“As a father and husband, I understand that decisions made in Washington have an immediate impact on families and shape the world we will leave to our children. I understand the profound blessing it is to be a citizen of the United States, and I will be responsible to help conserve that blessing for future generations.”