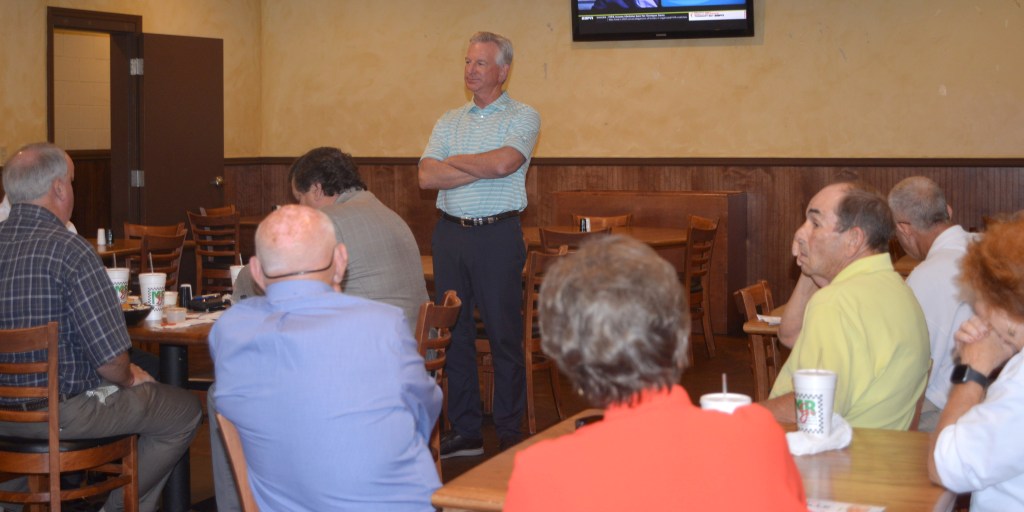 U.S. Senate candidate Tommy Tuberville met with Demopolis residents twice on Tuesday. He held a meet and greet event at Rooster Hall from 8 a.m. to 9 a.m. and again at Mr. G’s restaurant at noon.

While addressing a crowd at Mr. G’s, Tuberville said he decided to run for a senate seat after approximately a year of contemplation in order to give back to and help Alabama. The Republican candidate is a former Auburn University football coach who said he plans to use his recruitment skills in order to secure more industry to Alabama.

“The next ten years is going to be a boom in manufacturing technology,” Tuberville said, explaining that the workforce needs to develop more in order to be enticing to new industries. He also said he is impressed with local leaders across the county and state who are already taking steps in workforce development.

Part of his plans for training the workforce include giving high school students more education about technical vocations.

“We need to do a better job of educating our kids of the future, their next 60 years when they get out of high school,” Tuberville said.

“If you can’t have good education, then you’re going to struggle getting new industry and technology manufacturing to come in,” he said.

Tuberville also said that rural hospitals would benefit from greater connectivity, as well as changes to the healthcare system that currently does not offer enough payment to hospitals.

Tuberville plans to not accept any payment for serving as senator, and was recently endorsed by Alabama Farmers Federation’s political action committee, FarmPAC for the March 2020 primary elections.

“We’ve got a great opportunity in this state to put someone in Washington D.C. that’s just like you,” he said.

He also said his time living in other states helps him understand the lives of people from many different places, which is something that would benefit a U.S. senator. “You are basically a national senator. You make decisions not just for your state but for everybody.”

Tuberville plans to return to the area multiple times throughout his campaign.