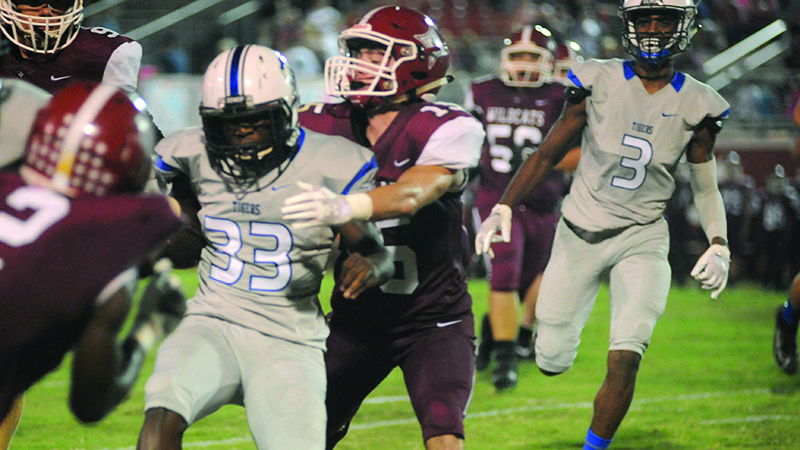 The Demopolis Tigers had few problems moving the ball against Shelby County Friday night as they posted a 41-7 region victory.

The Tigers scored on each of its possessions of the first half and had two scoring drives in the game that took only two plays. Leading the charge offensively was Kyjuan Rhone who gained a total of 90 yards and a touchdown on seven carries. Timothy Grayson only had two carries, but finished with 62 yards while Craig Nichols carried nine times for 50 yards, scoring two touchdowns. Jaqualon Smith made the most of his one carry, which went 49 yards for a touchdown.

Shelby County got the game started by moving the ball past midfield and all the way to the DHS 32 before turning the ball over on downs. The Tigers took over from there and two long runs by Stevenson set up a 2-yard touchdown for Nichols. Cole Wilson’s point-after made the score 7-0.

After a Shelby County three-and-out, Demopolis took over at midfield. Nichols got the initial handoff and he went 15 yards to the 35. From there, Stevenson found Shatarius Williams for the touchdown, increasing the Demopolis lead to 14-0 early in the second quarter.

The Wildcats would have its only burst of offense on its next possession, ultimately scoring on a 4-yard run. The point-after made the score 14-7.

But, that score did not hold long as the Tigers went down the field settingup a 2-yard touchdown for Rhone, putting Demopolis back on top by 14, 21-7.

Shelby County made things worse for themselves when a fumble was recovered by Tiger Jim Lawler near midfield. It didn’t appear the possession would amount to much, but on a fourth-and-four from the 49-yard line, Smith found running room to take it to the endzone with 2:25 to go in the half. Wilson’s point-after made the score 28-7 at the half.

The Tiger offense picked up right where it left off in opening the second half. A 35-yard run by Stevenson led to a 17-yard touchdown for Williams. After just two plays, the Tigers had pulled away to a 35-7 lead.

The final score of the game came with about 5:42 remaining in the third on a 5-yard run by Nichols. The missed extra-point made the final 41-7.

With the win, the Tigers improve to 4-2 overall and 2-1 in region play. Demopolis will return to Tiger Stadium on Friday, Oct. 11, to take on region opponent Tuscaloosa-Central. Kickoff is 7 p.m.