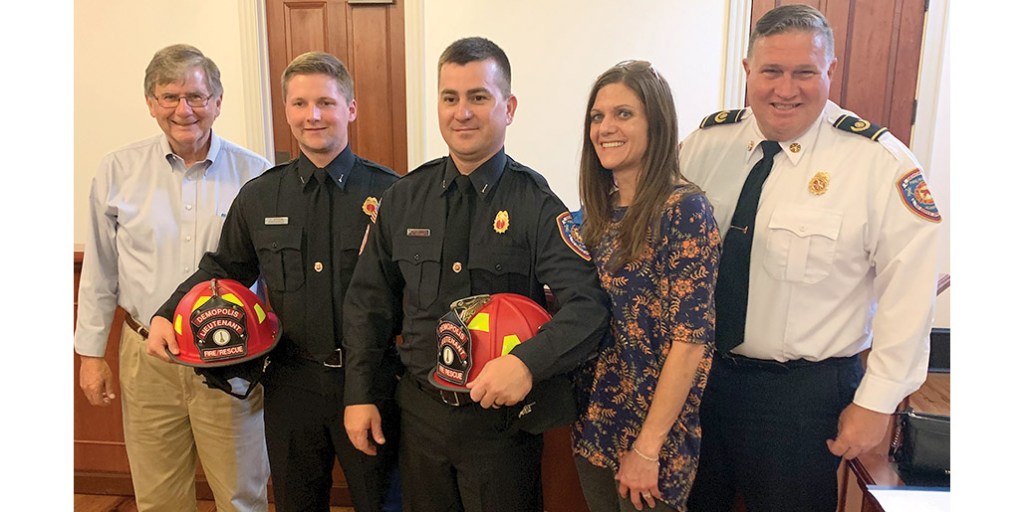 DFD members Andrew Wisdom and Robert Brown were presented with lieutenant helmets upon earning the advancement in rank.

Demopolis Fire Chief Keith Murray addressed the city council during a work session Thursday, Oct. 3, asking for their assistance in addressing ambulance calls outside of the city limits.

Murray said since implementing the Rescue 1 ambulance about a year ago, local crews are increasingly responding to calls further into surrounding areas.

On Wednesday, Oct. 2, Murray said Rescue 1 responded to an incident in Linden where a victim had sustained a serious head injury and required immediate transport to the hospital, but no other ambulance or helicopter was available to respond.

“It is happening more and more. We have a good model (for covering the city), but we’re going farther and farther. What we have is a good template, but we don’t have the resources to expand into Marengo County,” Murray said.

While the ambulance is permitted for county and even statewide emergency responses, the original purpose of establishing Rescue 1 was service within Demopolis.

“We can’t be everything to everybody and we shouldn’t try to be,” said Councilman Bill Meador. “We did this to take care of Demopolis.”

The council agreed to discuss the situation with local representatives on the Marengo County Commission.

During the regular meeting of the council, which followed the work session, the following items were discussed.

• Approved the placement of a speed bump on Cedar Crest after receiving signatures of approval from a majority of residents on the street.

• Mellinie House of the U.S. Census Bureau addressed the council asking for their support in publicizing the 2020 census.

“It is very important that your residents are counted,” House said. “In 2000, 63 percent of Demopolis residents were counted on the census and in 2010 it was 71 percent. What that means is there are people you are providing services to, but you are not funded for. Money follows the numbers, not the need.”

“It is also important in establishing the number of representatives our state has in the U.S. House of Representatives. As it stands now, Alabama may lose one to two seats in the House.”

• The council approved closing portions of Walnut Avenue, Commissioners Avenue, Main Avenue, as well as Capitol and Washington streets for trick or treating on Halloween night.

The next city council meeting is scheduled for Thursday, Oct. 17, 11 a.m., at Rooster Hall. There will be no work session prior. The public is invited to attend. The time change for the meeting was  approved to accommodate a scheduling conflict.

(This article originally appeared in the Wednesday, October 9 issue of the Demopolis Times.)