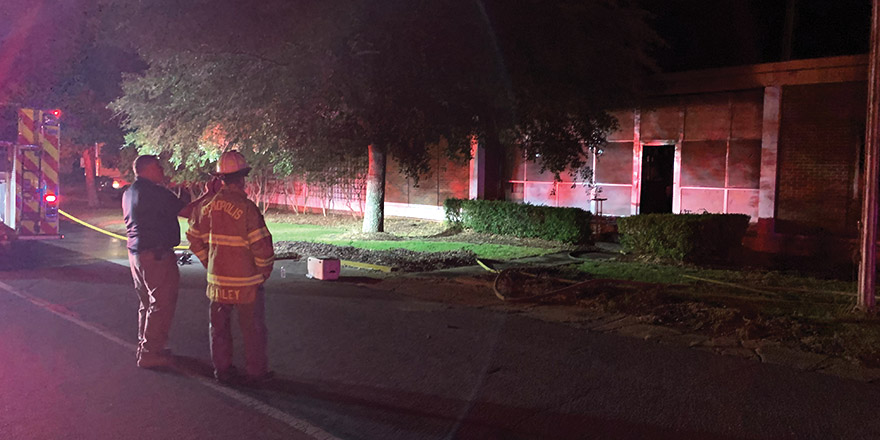 Demopolis firefighters at the scene after extinguishing a fire at the old police department building on Walnut Avenue.

The Demopolis Fire and Rescue received the initial call at 6:49 p.m. and, after about a 4 minute response time, were able to extinguish the fire within 4 to 5 minutes, according to DFR Battalion Chief James Bailey.

“We arrived to find heavy smoke coming from the front doors and one of the office windows, which is where the fire orginated,” Bailey said.

The fire at the long-vacated building is being labeled as arson.

Firefighters cleared the scene by 8:10 p.m.

Bailey said the fire is a good reminder for everyone going into the winter season.

“With winter time coming we ask the public be watchful of people in buildings where they shouldn’t be. No one wants people to be out in the cold, but there are other options. Sometimes people will start a fire to stay warm and they fall asleep, which could lead to tragedy.

“Even in our own homes, make sure your chimney is swept and your furnaces and other heating appliances are in good working order,” Bailey said.

Overall, Bailey said the old police building suffered moderate damage as much of the building is constructed with brick and cinder block.

(This article originally appeared in the Wednesday, October 23 issue of the Demopolis Times.)