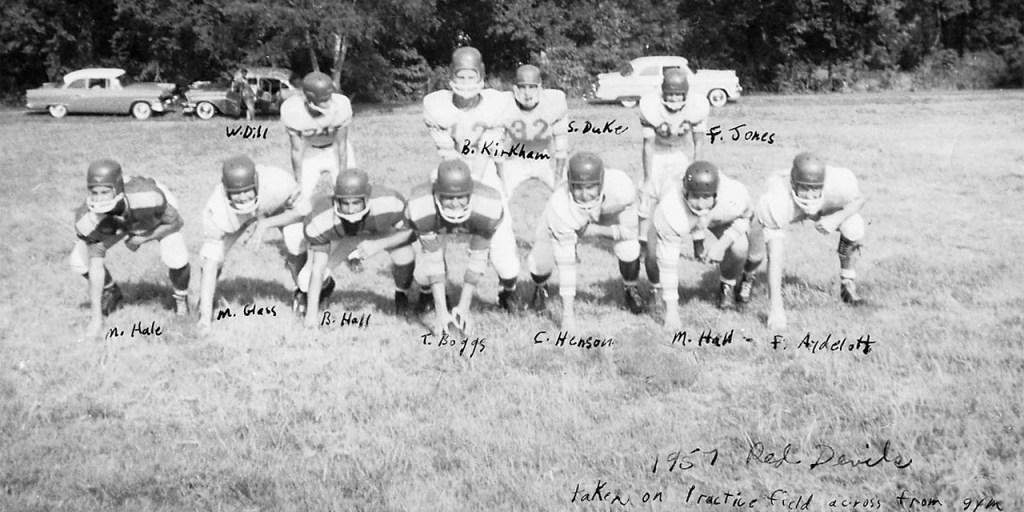 I haven’t used a picture in a while, so here is the photo of the first 11 of the 1957 Linden Red Devil football team. I hope you can make out the names printed rather small by each teammate. I am shedding a tear as I think of over half that group having passed from our midst: Melvin Glass, Charlie Henson, Marvin Hall, Frank Aydelott, Freddie Jones and Spencer Duke. Still get a chance every now and then to talk about those days with Mitchell Hall and Bobby Joe Hall if I catch them taking a coffee break at Little Drug, but quarterback Billy Kirkham and I stay in constant contact to discuss not only those football days, but so much more. Melvin (Moose), Frank and I remained as close as brothers until their passing, and Billy and I carry on that tradition 62 years later. I haven’t heard from Coach Dill’s son, Winston, since that final school year for us seniors.

There is just something so special about being on a high school sports team, and having those memories of grid iron, court or diamond battles with boys from surrounding towns. Linden’s final season was nothing to write home about due to several factors, including many injuries, so as to seasons I prefer to remember I select the 1956 bunch that only lost one game. Yep, you guessed it, Demopolis Tigers scrapped by us once more.

Since this writing is going to be short because of the picture, I would like to finish up by remembering a few of the opposing players from those days. Demopolis Tiger fellows that come right to mind are Tommy Brooker and Bobby Jackson, and Morris Meador from Butler. From the Greensboro team I was very good friends with Hurley Knott and Lee Walthall. Sweetwater memories from the other side of the ball have to include Charles Pope and good old Putnam native, Jinks Singleton. As I finish up my mind goes over to Marengo High in Thomaston, where Coach Morris Ward always managed to win games with so few boys. I’m thinking of my deceased distant cousin, Frank Thomas Jr., and my present preacher, George McKee.

What a heart full of precious memories. How they linger.

(This column originally appeared in the Wednesday, November 6 issue of the Demopolis Times.)