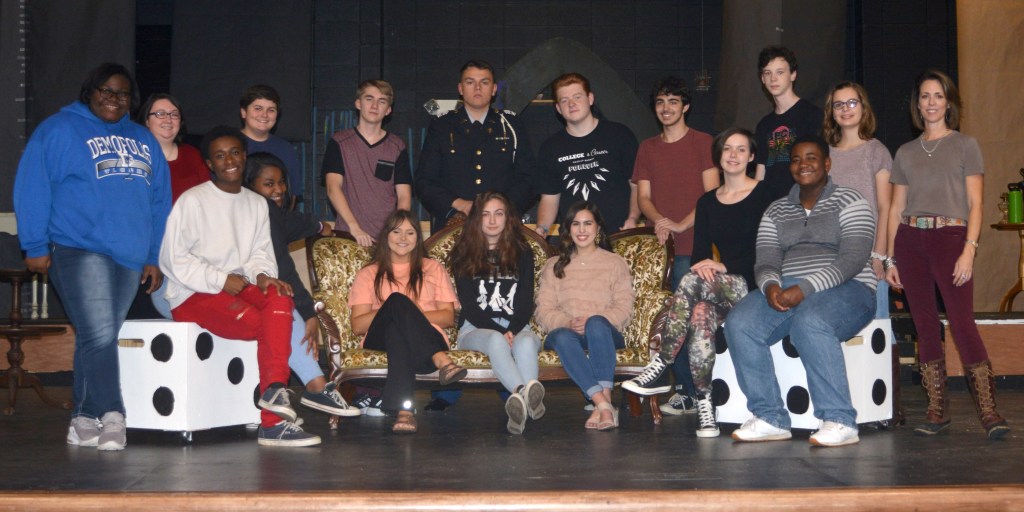 TAG will perform “Clue” on Nov. 14 -16 at 7 p.m. and on Nov. 17 at 2 p.m. Their version of the play is more reminiscent of the board game itself rather than the film adaptation.

The Demopolis High School Tiger Arts Guild is bringing the board game “Clue” to life in their upcoming play of the same name. The play itself also follows the plot of the 1985 movie version of “Clue.”

TAG director DHS theater teacher Jody Tartt said that one of the ways the play will differ from the movie is the set design. TAG’s set takes a cue from the board game itself, with giant dice and other set pieces that makes the scenery lean more towards the classic game rather than its film adaptation.

“It should be really obvious to the audience when they come in that our set design is to make it not look like a realistic mansion but to make it look like they’re watching the board game with the characters on it on stage,” she said.

Tartt chose the play in order to play on the strengths of each TAG member, which was especially needed having lost 14 seniors from last year.

Even with the set design working to the advantage of the small space and the play’s origins, Tartt said it has been difficult to block each scene, especially since once the characters arrive on stage, they almost never leave.

To prepare, TAG members watched the movie together after being cast, and since then Tartt said the actors have taken the comedy in stride.

“Comedic timing is very difficult and to see how much fun they have when they get it and they realize they’ve come up with something funny [is fun],” she said.

This year, she also has the added benefit of an assistant director. Former TAG member Jasmine Joiner returned to the high school theater to help Tartt bring the play to life, and her studies in communication arts with a concentration in film at the University of North Alabama make her extra fitting.

Joiner noted that the murder-mystery genre itself is making a comeback with the 2017 reimagining of 1974’s “Murder of the Orient Express” based on Agatha Christie’s novel of the same name and even an upcoming remake of the movie “Clue” itself.

Like Tartt, Joiner has been impressed with the student’s initiative in developing their own characters and bringing their own ideas to TAG’s version of the play.

“They’re highly capable,” she said. “It’s not just me telling them what to do.”

Having experience in theater and film, Joiner recognizes that while they both take a lot of time and effort, theater has a different level of energy, with a small crew wearing multiple hats in order perform a perfect show live.

(This article originally appeared in the Wednesday, November 13 issue of the Demopolis Times.)