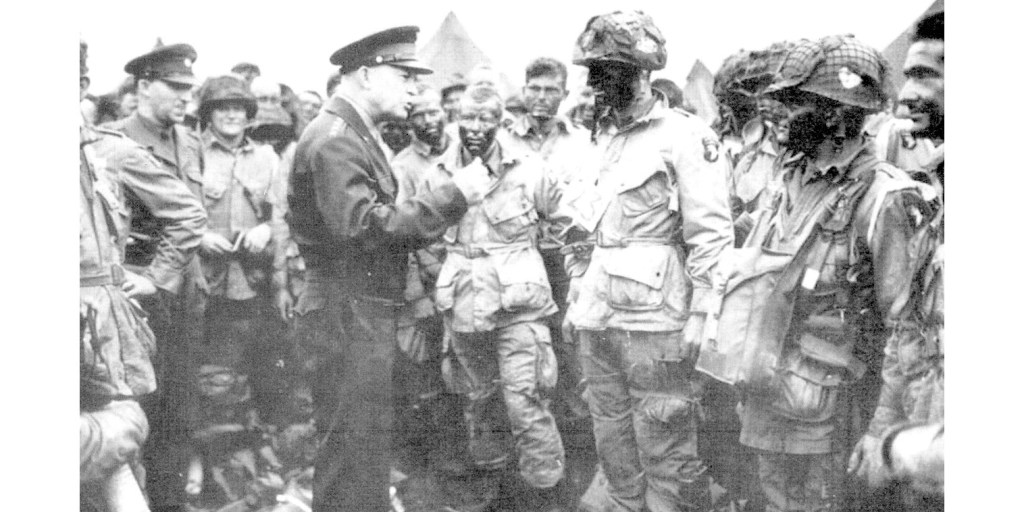 I have used this picture of General Eisenhower speaking to paratroopers of the 101st Airborne Division on June 5, 1944 before, but it just jumps out from the page when we remember Veterans’ Day, so here it is again.

We pause once more to remember and honor those men and women who have worn the uniform of the United States military, most of whom were not regular army or marine or navy or air force or coast guard, as Ike was regular army.

During the First World War, followed by World War Il, Korea and Vietnam, the American citizen was at the forefront with rifle in hand, as when at 11 p.m. on Nov 11, 1918, World War I came to an end, and those fellows and gals came home to civilian status for the most part.

I wrote a quite long column about partners in service on Nov. 10, 2004, as I followed the paths of my two senior partners, Hugh Lloyd and Woody Dinning, who were so much alike in ways, yet followed different paths during World War Il, after they had both graduated from law school at Alabama. Hugh was assigned to the Pacific in Military Intelligence, while Woody was sent to Europe to do … what else, Counter Intelligence. After each earned a distinguished war record, they, like millions of others, came home, put on civilian clothes, and got to work … practicing law in Demopolis for the rest of their lives.

The history of America is a history of war, because that is the nature of things. This column is not glorifying war, but is shinning a bright light of thanksgiving and praise on every man or woman who has answered the call, whether drafted or volunteered, or killed or maimed in action, or never left the shores of America. They all signed a blank check when that put on that uniform, offering themselves wherever needed.

Veterans’ Day is set aside to remember all, and for veterans and present serving troops to stand tall, and receive thanks from a few fellow citizens who will stop a moment to appreciate their sacrifice.

Have you hugged a Veteran today?

(This article originally appeared in the Wednesday, November 13 issue of the Demopolis Times.)