Meolinie House, partnership specialist with the U.S. Census Bureau, came to the Marengo County Commission meeting on Nov. 12 to speak about the upcoming census and the $167 billion in funding that is to be allocated based on the results.

House said that there was an increase in participation between the 2000 and 2010 censuses from 56 to 63 percent, but all eligible citizens need to participate in order to guarantee the correct amount of funding that is due to the county and its municipalities.

“We want to allocate the correct amount of funding to your area that is due to you based on your census numbers,” she said. 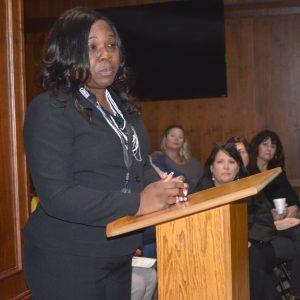 Meolinie House speaks to the Marengo County Commission about the 2020 Census.

House advised the commission to appoint a liaison and a Complete County Committee to continue bringing awareness to the census and encouraging residents to participate. Possible members of such a committee may be the commission chairman, the sheriff and the county administrator.

Census Day is April 1, and this year marks the first year that the census can be taken electronically. Participation is available online, over the phone, by mail or in person.

The bureau is also currently hiring local residents to help with the census.

“We want to hire people form your county to work your county,” House said.

The positions are part-time and House said typically pay $12-15 dollars per hour and 58 cents per mile. To apply, visit www.2020census.gov/jobs.

Other items discussed include:

• adopting the commission meeting days in 2020. The Marengo County Commission meets the second Tuesday of each month except when following an election, at which point they will meet the Thursday following election day.

• adopting an increase in the monthly charge for county employees’ $10,000 Minnesota Life Insurance policy. The fee increased from $3.70 to $4.20 a month.

• announcing that the commission will accept bids in December for the Inmate Telephone Contract.

• voting to accept the retirement of Joyce Morgan as Marengo County Public Library Director and appoint Sarah Dailey to the new position and adjust her salary accordingly. They also voted to accept applications for overseer/custodian of the Chickasaw State Park.

(This article originally appeared in the Wednesday, November 20 issue of the Demopolis Times.)