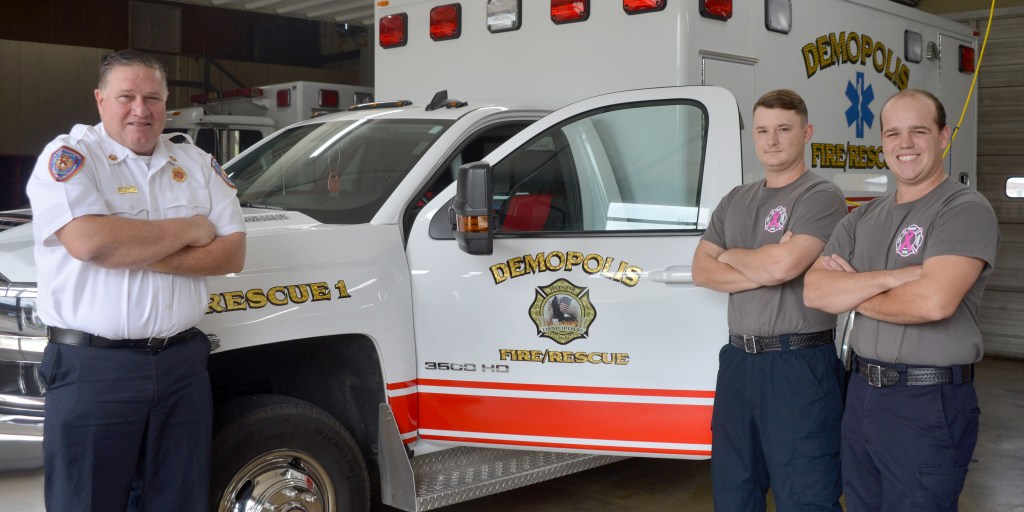 Rescue One serves the citizens of Demopolis and the surrounding area in the event that the Amstar ambulances are already deployed elsewhere. Pictured above, from left, are Fire Chief Keith Murray, firefighter EMT Rodney Fields and firefighter Nick Brown.

Since its first official run in January of this year, Rescue One has responded to approximately 500 incidents in Demopolis and the surrounding area. The rescue truck has become an integral part of the Demopolis Fire & Rescue’s response to medical emergencies.

Originally outfitted with iPads for documentation, multiple medical bags in two locations, the latest LifePak heart monitor/defibrillator, a stair chair, an obstetric kit and additional medical supplies, the truck’s arsenal has grown to include a StrongArm rescue tool that was originally kept in a fire engine and a LUCAS automated CPR device.

Fire Chief Keith Murray said the truck’s original purpose of responding to medical calls in order to preserve fire engines has been met. Rescue One’s partnership with Amstar Ambulance Services has also continued to develop over the last year to what Murray described as a “symbiotic-type relationship.”

While Rescue One responds to calls in place of Amstar should the ambulance service be responding to other calls in the county, Murray said that many times the rescue truck as transported an Amstar medic, who carries various medicines and medical equipment that EMT firefighters don’t have, along with them or respond to calls and mitigate the situation until an ambulance arrives to continue the care and transportation of the patient.

“We’ve been able to optimize the calls to better serve the people of Demopolis and the surrounding area,” he said.

Some calls do require an accompanying fire engine in order to provide the patient with the necessary manpower for care, such as in the event of cardiac arrest and several people are needed to mitigate the situation.

One of the strongest points that Murray shared, and that Mayor John Laney and the city council made clear with the addition of Rescue One, was that no Demopolis citizen would receive a bill from services rendered through the rescue truck.

To mitigate the costs of running the truck, DFR sends a bill to a patient’s insurance, but they only accept the payment provided by the insurance company and do not accept payment from residents.

If a Demopolis citizen’s insurance does not provide such coverage of if they do not have insurance, both Murray said Laney said it would be handled so that a bill is not sent to a resident.

“That service comes from being a citizen of the city, so if you don’t have insurance, you still will get service without being billed,” Laney said of Rescue One.

Murray also said that joint operations with Amstar will result in Amstar handling the billing.

Laney said Rescue One has been a positive addition to the city and to the department because the rescue truck has taken some of the burden off of the fire engines when responding of EMS calls and residents have access to emergency intervention quickly.

“It has brought a service to our community to where our citizens can feel assured that within a very short period of time in the event of an emergency that there is going to be help there,” Laney said, later adding “I can’t say enough about the dedication of Chief Murray and the other firemen in picking up this torch.”

Murray is pleased with Rescue One’s four-minute response time, 14- to 20-minute on-scene time and seven-minute transport time. He said the next step for DFR’s Rescue One would be additional education to the EMS firefighters. Nine more are currently undergoing EMS certification.

Demopolis Fire & Rescue also has the support of Special Rescue One, a rescue truck on loan from Livingston Fire Rescue while LFR has an engine on loan from DFR. Rescue One responds to fires and also serves a rehabilitation center for firefighters when Amstar responds to calls.