Late field goal lifts Bulldogs over Brantley; one win away from Super Seven 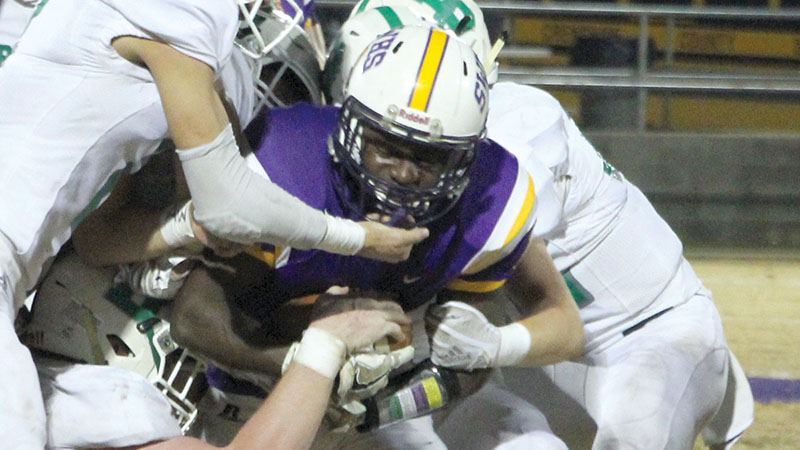 Jaylin Dixon fights for positive yardage against the Brantley defense. Dixon finished the contest with 83 yards on 16 carries and scored a game-tying touchdown late in the fourth quarter.

The Sweet Water Bulldogs continue their march through the 2019 1A State Playoffs and are only one win away from a chance at another state championship after a field goal in the final seconds led to a quarter-final victory.

The Bulldogs had their hands full in the quarter-final, edging out Brantley, 38-35. The win sets up a matchup against undefeated Lanett High School in this Friday night’s semi-final with the winner moving on to the 1A State Championship to be played at Auburn University’s Jordan Hare Stadium.

The quarter-final against Brantley was a back-and-forth affair. While Sweet Water jumped out to an early lead, Brantley came storming back leading to the dramatic finish.

Sweet Water got on the board first when Jaland Lewis Horton finished off a drive with a 15-yard touchdown run. Michael Alan Cole’s point-after made it 7-0 with 8:05 to go in the first quarter.

The Bulldogs from Brantley followed with a score of their own at 4:23 to go in the quarter when Tucker Kilcrease completed a 17-yard touchdown pass to Messiah Burnett.  Adam Carlisle’s extra-point tied the game at 7-7.

The rest of the quarter belonged to Sweet Water as they would end up scoring two more times in the final minutes of the first. The Bulldogs took a 13-7 lead on 2-yard push into the endzone by Horton. The extra-point was no good.

Then, Xavier Lucy busted through the Brantley defense for an explosive 85-yard touchdown run that lifted the Sweet Water to a 19-7 lead. Jaylin Dixon followed with a 2-point conversion run into the endzone, putting the Bulldogs up by two scores, 21-7 with 1:34 to go in the first quarter.

The 14-point lead would not hold as Brantley began to roll about mid-way through the second quarter. With 4:08 to go, Kilcrease completed a 28-yard touchdown pass to Burnett, cutting the lead to 21-14 following the extra point.

Following the halftime break, Brantley closed the gap even more, as D’Andrea Owens scored on a 1-yard run into the endzone. The extra point was no good as Sweet Water held on to a one-point lead, 21-20 with 10:26 to go in the third.

The two Bulldog teams would battle through the third until the 1:38 mark when Brantley broke loose with a 37-yard touchdown pass from Kilcrease to Morell Edwards. A successful 2-point conversion put them ahead of Sweet Water, 28-21.

With the season hanging in the balance for both teams, Sweet Water would even things up when Braiden Broussard scored from 1-yard out on a quarterback sneak. Cole’s extra-point knotted the game at 28-28 with 9:22 to go in the game.

Brantley continued finding some success through the air and once again took the lead when Kilcrease found Edwards who took it in from seven yards out, giving Brantley a seven-point edge with only 5:50 to go.

Sweet Water wasted little time as they came right back with a 2-yard touchdown run by Dixon. Cole’s point-after made the score 35-35.

The Bulldog defense would shut down Brantley on the following possession, providing the offense an opportunity for Cole to set up, and convert, on a 20-yard field goal attempt to win the game and secure Sweet Water’s spot in the 1A semi-finals.

The offensive stats for Sweet Water and Brantley were fairly even, although each team moved the ball in different ways. Sweet Water ended the game with 305 rushing yards whereas Brantley had 303 passing yards. In all, Sweet Water outgained Brantley 337-317.

The victory sets up a big test for the Bulldogs in the semi-final as they will host Lanett High School. This will be Sweet Water’s fourth consecutive home game through the 2019 playoffs.

Lanett will come into the game a perfect 12-0 and are the 1A Region 4 champions. Quarterback Kristian Story who has set the AHSAA record for touchdowns accounted for with 166 over his high school career leads the team. He is committed to the University of Alabama.

Kickoff between the Bulldogs and Lanett is scheduled for Friday, 7 p.m., at Nolan Atkins Stadium in Sweet Water.