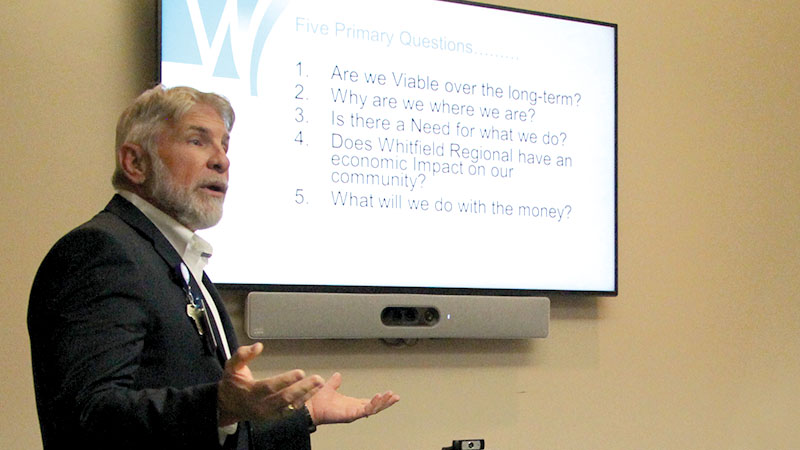 (Editor’s Note: This story has been corrected. Originally, it stated the hospital receives $3 million annually in local taxes. The hospital actually receives $300,000 in tax dollars. We apologies for this error.)

Representatives of Whitfield Regional Hospital stated its case in favor of an upcoming vote that would provide the local hospital with additional funding through a county-wide property tax increase.

Voters in Marengo County will go to the polls on Tuesday, Dec. 10 to decide whether to add 4 mils to current property taxes. The 4-mill ad valorem tax will be specifically dedicated to WRH.

On Tuesday, Nov. 19, hospital representatives held the first in a series of town hall meetings to discuss the need for the new revenue and how it would assist the hospital moving forward.

“We have seen 11 hospitals close in the last few years and projections are that there will be more. This is not one of them. This is one that needs to make it,” Brewer said.

Among the reasons Brewer said Marengo County and the surrounding area needs WRH is due to health factors, including a 17 percent diabetic rate and a low birth rate.

He said for many years the hospital has been constricting services in order to meet financial obligations, but added that has been a problem as it has given the hospital fewer options in creating revenue.

“This is a viable hospital, but with no access to capital you tend to start a downward spiral. We own nothing. We do not own this building. Other than equipment the hospital has no assets. We have no ability to get loans to update our equipment and make needed repairs to the building,” Brewer said.

In an effort to expand services, WRH became a regional stroke center in June and since that time has treated 125 stroke patients. Since becoming a trauma center there has been over 50 traumas treated, according to Brewer. Those and other new services have increased revenue for the hospital by about $2.6 million, but still short of providing a financial margin for long-term financial security, he said.

“We have to have access to capital in order to maintain our building and update technology. You cannot replace technology and equipment in Alabama with our current margins,” Brewer said.

He adds that the 4 mil tax “will not save” the hospital, but will provide a means to create a 10- to 15-year capital plan for the future. Along with the tax increase, Brewer said he hopes ownership of the building, currently owned by the City of Demopolis, will be transferred to the hospital, providing additional options in building a capital plan.

The hospital also receives about $17 million in federal Medicare and Medicaid funding each year, which Brewer describes as “new money.”

“This money gets churned into the community and that all goes away if the hospital isn’t here. Can we really afford to take $17 million out of our local economy?,” Brewer said.

Hospital officials hope to continue adding new services including health clinics such as one opened in Linden last month and bringing back to the hospital an obstetrician and childbirth. “We want to bring it back, not because we will make money on it, but because there is a true health need,” Brewer said.

In listing some of the current priorities for the hospital, Brewer said the hospital needs about three to four roofs, a new boiler, and to replace diagnostic imaging equipment.  “If our boilers go down we’re done. I tell everyone we operate until we are not. I don’t have $500,000 to replace these things. We sit down and talk about how we’re going to keep our doors open for another week,” he said.

The hospital does receive about $300,000 annually in tax dollars. However, Brewer said Marengo County is among the last counties in the state to pass a tax specifically to support a hospital. He said 49 counties already have that type of tax in place.

Brewer said he feels confident that the hospital can be a success with additional financial support.

“We can get this hospital to operationally breaking even as we have less cash constraints and grow business. There’s nothing we can do now but go and beg [when cash needs arise],” Brewer said.

Marengo County Commissioner Jason Windham, who was in attendance at the meeting, said if the tax is approved the funds can only be used for the hospital. It was also said that if the hospital were to close the additional tax would no longer be collected. “By state law we cannot use these funds for any other purpose other than the hospital,” Windham said.