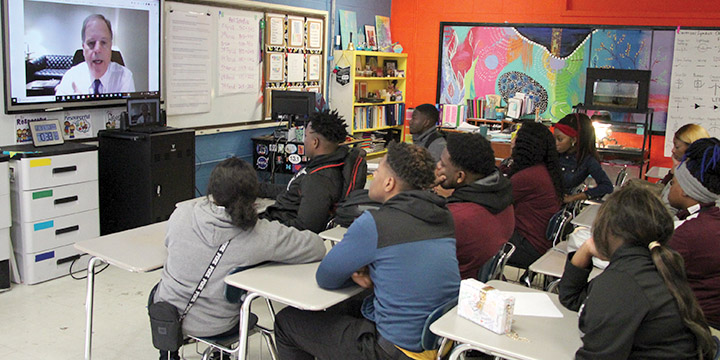 Students at A.L. Johnson High School received a unique opportunity recently in meeting face-to-face with U.S. Senator Doug Jones, although they were hundreds of miles apart.

Through technology and the Internet, Jones joined history and science students who asked the senator a series of questions and learned more about the role of a U.S. Senator. Jones spoke about his duties as well as current items being considered by the Senate, including items being debated currently on the floor.

According to ALJ Science teacher Alicia Seale, the school began reaching out to elected officials last spring inviting them to visit students on their Thomaston campus.

“As a small, rural school, we have unique challenges. While Sen. Jones could not meet with the students in person, he said he could do a Skype meeting,” Seale said.

As juniors and seniors, Seale, along with history teacher Para Davis, hoped to put more political faces with names as the students are approaching voting age.

“We want our students to be engaged in the voting the process,” Seale said. “Some are already voting age and we want them to take full advantage of their right to vote.”

“We’ve studied many of our elected leaders and have discussed many issues. This allowed us to put a face with the name,” Davis adds.

The students asked Jones three questions, the first having to do with how Congress can deter school shootings.

“(Congress) is working to provide greater resources and grants to make schools harder targets. I believe many here agree that we would like to see tighter background checks and access to guns. It’s a real problem, along with gun violence overall. I am not in favor of teachers with guns or putting more guns in our schools,” Jones said.

“College loans are a real issue. We can’t afford to forgive all loans; it’s too much money. What I would like to see is our employers get involved with ways of helping their employees. We are also seeing bills (forgiving loans) for certain high-need professionals, such as healthcare,” Jones said.

The senator was also asked if he would vote to impeach President Donald Trump.

In closing, Senator Jones encouraged the students to speak with their families and participate in the 2020 U.S. Census.

“It is incredibly important that we count everyone in the State of Alabama,” he said. “There is a lot of money dependent on the census and not losing a Senate seat.”

In closing, Jones encouraged the students to stay involved in the political process and to vote.

“Learn about the candidates and not party,” he said. “Elections have consequences and every vote counts.”

“This is an awesome opportunity for our school. Our teachers had the idea and they worked together to bring a great virtual experience to our students,” Horton said.