Linden is bringing some spice to the holiday season with the annual ChiLLy Fest set to kick off this weekend.

ChiLLy Fest begins Friday with a carnival beginning at 4 p.m. From 6-9 p.m. will be the Anything But Cook-off, the Chili Cookers Party and a free concert by Farmer’s Daughter. 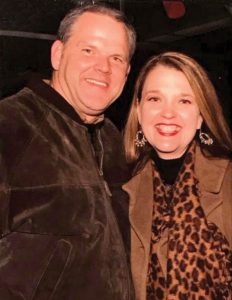 Mitzi and Greg Bates in a photo taken just moments before the 2006 Christmas Parade of Lights in Linden. As a member of the city council, Mitzi Bates helped plan that first parade, but she’s said it was her late husband’s idea to have the nighttime parade for the residents of Linden. Mitzi said this picture is displayed on her mantel. “It reminds me not only of that one particular moment in time at Linden’s first Christmas Parade of Lights but also of the true meaning of Christmas, which is love,” she said.

On Saturday, festival-goers can look forward to food and crafts vendors from 8 a.m. to 2 p.m., Christmas Music from 10 a.m. to 2 p.m., the ChiLLy Fest Cruise In Car Show from 9 a.m. to 3 p.m., the Chili and Cornbread Cook-off judging at 11 a.m. with the public serving at noon, the Christmas Parade of Lights in downtown Linden at 6:30 p.m. with a Fireworks Extravagance to follow the parade.

“This honor is particularly meaningful to me because of my memory of Linden’s very first Christmas Parade of Lights,” Gates said. “I was joyously overwhelmed but not one bit surprised by the enthusiasm of the Linden merchants, churches, schools, and community volunteers who responded to the idea of hosting Linden’s first nighttime parade — the 2006 Linden Christmas Parade of Lights.”

Gates said the idea for the nighttime parade was originally that of her late husband, Greg Gates.

“I’ll always remember the parade as part of Greg’s Linden legacy, which is at the heart of why I am so very honored to have been asked to serve as grand marshal,” she said.

A native of Linden, Gates is the daughter of the late Tex and Fannie Mae Forrester. She and her late husband established their home in Linden in December 1999. Gates has been an English teacher, having earned her undergraduate degree in English at Livingston University (now the University of West Alabama) in 1985 and her graduate degree at Vanderbilt’s Peabody College in 1993. After teaching in Nashville for three years, she moved back to Linden in 1997 and began teaching English composition and speech at UWA. In 2006, Gates joined the faculty at Linden High School where she still teaches English. Gates is a member of Thomaston Baptist Church where she serves alongside Pastor David Traywick as worship leader and choir director.