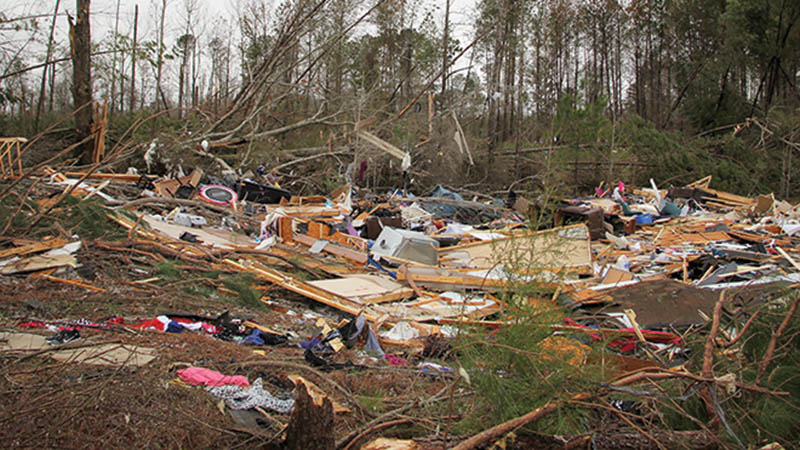 The area of west of Demopolis where two mobile homes were destroyed by a tornado Monday night.

Several homes and three injuries were reported after a confirmed tornado struck down in the Saltwell area, west of Demopolis Monday night.

According to Marengo County Emergency Management Director Kevin McKinney, officials with the National Weather Service were on the ground in the damage area Tuesday to determine the severity of the storm, which was declared an EF2. 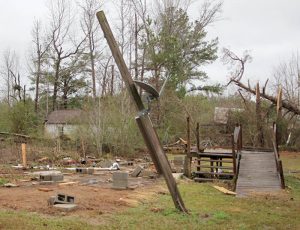 The footprint where a mobile home was located prior to the tornado.

The damage was concentrated in an area along Hwy. 80, near the intersection of County Road 57. Two mobile homes were completely destroyed by the tornado and a roof was blown from a brick home. About 12 homes and other structures in the area suffered at least light to moderate damage. It is also reported that an 18-wheeler overturned.

McKinney said three people were taken to the hospital with non life-threatening injuries as a result of the storm.

While the damage to the three homes was extensive, the total damage done in the area will likely not be enough to qualify the area for disaster assistance. 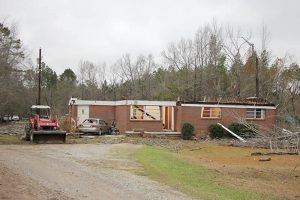 The roof was ripped from this home.

“We will not meet that threshold so it will be up to our community — people, churches, the Red Cross, Salvation Army — to help these people whose homes were damaged,” McKinney said.

Among those injured were members of one family, two of whom are employees at Colonial Haven Care and Rehabilitation. Co-workers have set up a Go Fund Me account titled “Help the Wright Family.” The family lost everything in the storm, according to those organizing the effort. (Help the Wright Family Link)

The storm took a northwestern path through Marengo and into Hale and Perry counties. The storm system also produced a tornado that led to the death of a Lawrence County couple in the northwestern part of the state.