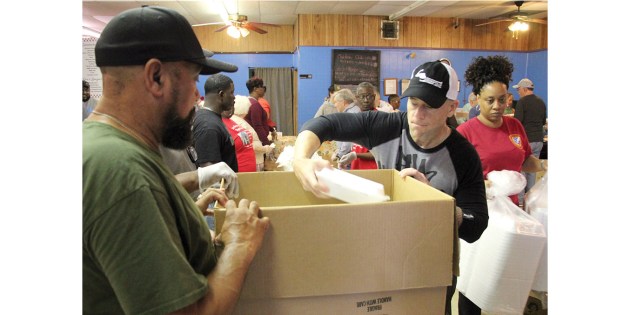 The Demopolis Coming Together Organization held its annual Christmas Feeding on Dec. 25. Members of the CTO and other volunteers began preparing plates at 5 a.m. and delivered them to the elderly and others in need throughout the community. The plates are prepared each year at Kora’s Restaurant.

The CTO also holds an annual toy drive each Christmas, titled Give a Child a Wish Project. The toys and other gifts are provided to children ages 5-12. This year, the toys were distributed on Sunday, Dec. 23.

CTO President Willard Williams said the feeding and toy drive are a big success due in large part to the donations from area businesses and residents. He said this year’s toy drive provided gifts to about 600 children while the Christmas Feeding served approximately 3,000 residents.

(These photos originally appeared in the Wednesday, January 1 issue of the Demopolis Times.)