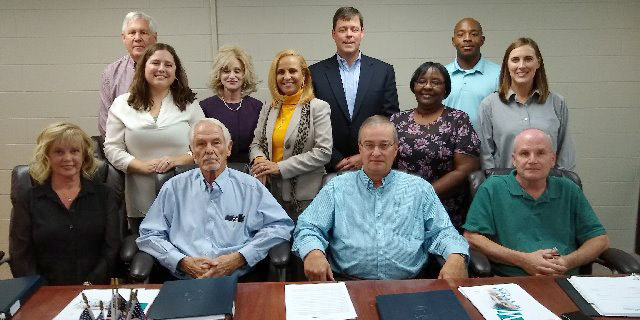 Three members of the Marengo County Economic Development Authority Board of Directors were re-appointed during a Marengo County Commission meeting Tuesday. Pictured above are many of the members of that board. The board works behind the scenes representing all of Marengo County in an effort to bring business, industry and employment opportunities to Marengo County. Members of the board are appointed by the Marengo County Commission (one from each district), Linden, Demopolis, Providence, Thomaston, Myrtlewood, Faunsdale, Dayton, Sweetwater, the Linden Industrial Development Board and the Demopolis Industrial Development Board. Pictured are, from left, (seated) Linda Yelverton, Joe Friday, Darren Glass, Scott Collier; (standing) Claud Nielson, Katie Summerville (Chairperson), Jo Ellen Martin (Executive Director), Aliquippa Allen (Treasurer), Charles Singleton, Linda Hudson, Errol Agee-Thomas and Justina Allgood. Not pictured are Bill Mackey, Jimmy Lake, Mike Robison, Jason Pendergrass, Jim Parr, Loretta Moore and Gwen Tucker.

The company will be located in Demopolis and is expected to bring up to 60 new jobs to the area.

Commissioner Jason Windham thanked company representatives who were present at the meeting for bringing the new industry to the county. “Marengo County is excited to have you here, and we appreciate you coming to our county.”

The commission also approved three reappointments for the MCEDA Board of Directors. Justina Allgood will serve for District 2, Mike Robison for District 3 and Errol Agee-Thomas for District 4.

Being the first meeting of the year, Commissioner Michael Thompson passed the gavel to 2020 Commission Chairman Freddie Armstead.

“Thank you for the job that you’ve done in the past year,” Armstead said to Thompson.

Other actions taken by the commission include:

• approving the Demopolis Times’ bid for publication of the voters list at $5,558.87.

• announcing participation in the Severe Weather Tax Holiday during Feb. 21-23.

• entering executive session based on good name in character followed by adjournment.

The Marengo County Commission meets every second Tuesday of the month at 9 a.m. at the courthouse.