BOE honors 2019 Teachers of the Year 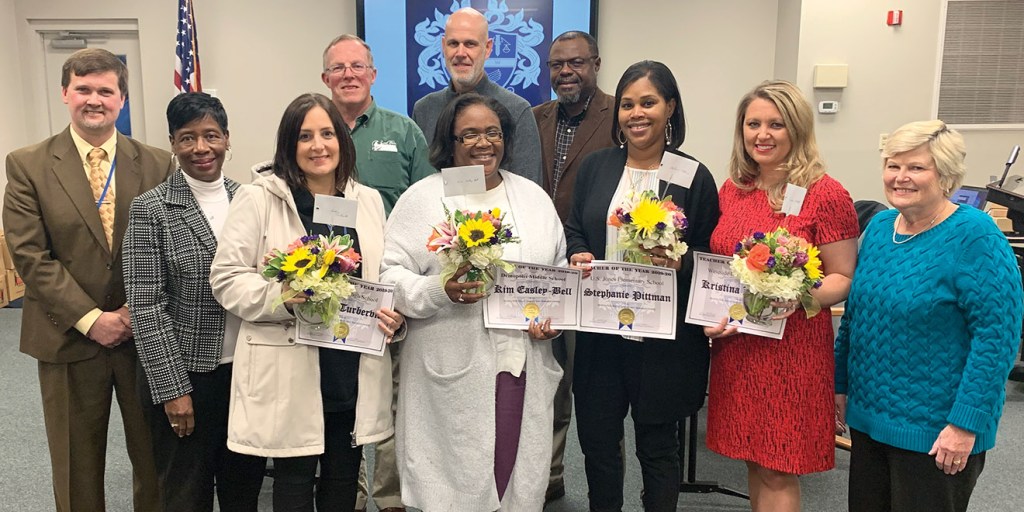 During its February meeting, the Demopolis City Schools Board of Education recognized its 2019 Teachers of the Year and heard a proposal from students regarding honoring two of their classmates.

Each year, one teacher from each of the system’s schools is nominated by their peers as Teacher of the Year. From there, two teachers — one from elementary and another from secondary grades — are selected as the district-wide representatives who qualify as nominees for statewide honors.

Each of the honorees was presented flowers and a certificate.

Pittman and Turberville were selected to be this year’s representatives from the district for statewide honors.

The board also heard from DHS students, and members of the River City Blue Marching Band. Zaniaya Sewell and Carson Kallhoff asked the board for its consideration in naming the east and west side concession stands at Tiger Stadium in honor of fellow band members Rayshawn Benison and Natasia Daniels, two students who drowned in October at the Demopolis City Landing. They asked that plaques be placed to officially name the concession stands in honor of the two students. No action was taken on the request.

Other items discussed by the board included the following items.

• Superintendent Kyle Kallhoff reported that a civil rights complaint has been heard and that it was ruled the school system was in compliance with guidelines.

• Members of the board were recognized and presented gifts from the schools in recognition of January being School Board Appreciation Month.

• The board approved upcoming field trips for sports teams and clubs.

• The personnel report was approved that included conditional employment of Javier Ruiz as JROTC instructor at DHS; the retirement of elementary teacher Amanda Harrison; Madaline Jacobs as a substitute; Jeffery Bonner as a long-term substitute with JROTC; and Nan Dollar as a long-term fourth grade substitute.

• Kallhoff announced that this year’s Young Authors Symposium would be held Tuesday, Feb. 11, inside the DHS auditorium and gym.

(This article originally appeared in the Wednesday, January 29 issue of the Demopolis Times.)