The Marengo County Sports Hall of Fame announces that Demopolis High School senior Timothy Grayson is the recipient of the organization’s annual scholarship and that the 1977 Marengo Academy baseball state championship will be honored as the “Team of the Year” at the organization’s induction banquet to be held Monday, Feb. 10. 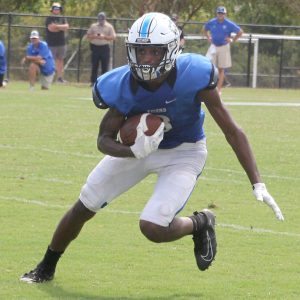 Demopolis High School’s Timothy Grayson has been named this year’s recipient of the Marengo County Sports Hall of Fame Scholarship.

Grayson is a senior at DHS and participates in football and track. He has maintained a 3.6 grade point average, earned a 25 on his ACT and is currently enrolled in honors classes. He plans to attend the University of Alabama and earn a bachelor’s degree in mechanical engineering.

Grayson is the second oldest of four boys but did not play football all four years he was in high school. When people asked him: “Why haven’t you played all four years in high school?” He gave them a simple answer, “It wasn’t in God’s plan.” A couple of years ago his father was diagnosed with a heart condition that required surgery. Grayson decided not to play any sports for a while so that he could help his parents keep things in order by helping out with what he calls, “the small things.” Once things were settled around the house, he turned back to his passion for sports.

“Grayson is a prime example of the student athlete that meets the requirements of this scholarship,” said Terry Speegle of the MCSHOF.

Also to be recognized during the banquet will be the 1977 MA baseball team that brought home the AISA state championship that season under head coach Jesse Little.

This year’s induction and awards ceremony will be held Monday, Feb. 10, beginning at 6 p.m., with a social gathering at 5:30 p.m. Tickets are $25 and can be purchased by contacting Speegle at 334-216-2666, Jim Stanford, Olen Kerby, Kenny Freeman, Darren Glass, First Bank of Linden, Johnny Brooker or Nathan Hardy.

(This article originally appeared in the Wednesday, February 5 issue of the Demopolis Times.)